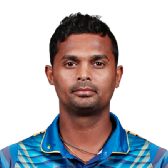 Australia's "best of the Big Bash League" took Sri Lanka to the final ball. The hosts and their three debutants fought to the finish against the visitors in front of a raucous crowd at the MCG, but a win offered Sri Lanka the chance to wrap up the series at Kardinia Park on Sunday.

The Perth Scorchers' Andrew Tye was left with six runs to defend from the final over, and one from the final ball. Chamara Kapugedara surveyed the ring field then punched the winning boundary through the covers to secure the result. His composure ensured Sri Lanka finished in the ascendant after looking the more likely victors throughout their chase, largely due to a boundary count that outstripped the hosts, 21 to 13.

None of Australia's batsmen were able to go on to substantial scores after Upul Tharanga sent them in to bat, as a spongy pitch and disciplined Sri Lankan bowling denied them the ability to find a domineering rhythm. Sri Lanka's pursuit was then given the desired fast start by Dilshan Munaweera after Tharanga was dismissed in the first over, and Asela Gunaratne's nimble half-century guided the tourists to within sight of victory in front of 42,511 spectators, many of them barracking for Sri Lanka.

Gunaratne also made a brief but notable contribution with the ball, goading the captain Aaron Finch into a skier after he had appeared the man most likely to produce a truly damaging tally for Australia. The dismissal came two balls after Finch had hammered the biggest six of the night, and 10 runs after Michael Klinger's long delayed international debut was ended.

Lasith Malinga, making his own return from a long absence, bowled tidily and scooped a couple of late wickets, while Seekkuge Prasanna gave up a mere 23 runs from four overs that featured 10 dot balls and should have been rewarded with the wicket of Travis Head - dropped badly by Tharanga at point.

Tharanga's night did not improve when he opened the batting, as he received a perfectly pitched ball going across him from Pat Cummins in the first over and offered a thin edge through to Tim Paine behind the stumps. While the Australians celebrated this wicket with some gusto, they were soon haring about the MCG outfield as Munaweera and Niroshan Dickwella went to work.

Their partnership ensured the run rate was not going to be much of an issue, compelling Finch and his bowlers to chase wickets and consequentially offer more scoring opportunities. Adam Zampa delivered his usual handy spell and deserved his two wickets, but oddly Finch did not try his other spin options until introducing Ashton Turner with only a modest equation required.

Turner's offbreaks were rewarded by a smart Paine stumping to end Gunaratne's innings just when he appeared to be coasting home, before a debatable lbw verdict against Milinda Siriwardana closed the gap between the teams. In the end, Kapugedara was left needing a single from the final delivery, an assignment he made light work of with a steely drive for four.

Klinger, Turner and Billy Stanlake were all named for their first T20 appearances for Australia but there was no room for Ben Dunk and only three specialist batsmen selected - Finch, Head and Klinger. The visitors included the left-arm wristspinner Lakshan Sandakan, who was so effective against Australia in the Test series in Sri Lanka last year.

Malinga kicked off the evening with his first ball in a full international since February last year, and also bowled the first ball faced by Klinger in an international match no fewer than 19 years after his state debut. The pitch was a little on the sluggish side, but Klinger and the acting captain Finch made a decent start with a smattering of boundaries and hustling between the wickets.

They had 76 on the board by the time Klinger tried to tug a Sandakan googly to the leg side and was pouched by Malinga via the resultant top edge. Finch had his eye on a big score as leader, but after depositing Gunaratne's first ball well into the Great Southern Stand he tried to repeat the trick two balls later against an offcutter and popped another high catch.

From there the innings was a sequence of fits and starts, as Head, Moises Henriques, Turner and James Faulkner all offered cameo contributions. However, Prasanna's spell was particularly tidy, Sri Lanka did well to keep the boundary count down - only seven fours and four sixes in total - and two wickets in successive balls for Malinga in his final over also served to aid the tourists' ultimately winning cause.