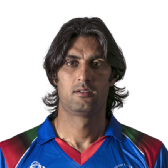 Shapoor ZadranAfghanistan
Afghanistan tour of England at Lord's, Jul 11 2017
No result
Player of the Match

The sight of Shapoor Zadran running in with his long mop of hair flopping about as he leaps into his delivery stride has warmed more than a few Afghan hearts in the eight years since he made his national team debut.

That warmth was needed on a damp and chilly day in London, and Shapoor provided more than enough to keep the 8000 fans who showed up in St. John's Wood feeling snug and toasty. His three wickets shone through the intermittent rain on Afghanistan's debut at Lord's, the standout performance on a festive but frustrating day that ended with no result.

When Shapoor bounded in with the new ball, he brought a declaration of intensity to his team-mates and the opposition that this was going to be treated as much more than a friendly exhibition. By his seventh ball, he had bounced out Brendon McCullum, cramped for room attempting an uppercut. At that stage, there were only about 3000 fans in the ground, but by the time he dismissed Chris Read for his third wicket more than three hours later, the crowd had swelled to more than double that.

They may have taken up less than half the ground, but the full-throated roars for each diving stop, each sharp throw, each catch taken may very well have surpassed the decibel levels heard for the sellout crowds that turned out daily for the Test match completed on this ground just two days earlier. The Afghanistan fans were raucous, rowdy and resolute in their unwavering support despite the rain and a staunch challenge put forth by a very competitive MCC line-up.

Sam Hain put up the biggest resistance. The other man involved in the Luke Fletcher incident from Saturday night at Edgbaston, Hain had a nervy start, perhaps the events of that day still fresh. It took him 17 balls to get off the mark, but two balls later he bashed a pull over midwicket for his first four. He settled into a groove soon after, producing a series of crisp drives through the off side and finished with eight boundaries in his 76 to top-score for MCC in their 40-over total of 217 for 6.

After Shapoor claimed Misbah-ul-Haq caught behind in the seventh over, Hain combined with Shivnarine Chanderpaul, and then Samit Patel after Chanderpaul retired hurt, for a combined 150-run third-wicket stand. The partnership was interrupted twice by rain delays, the second of which came at the 18-over mark with the score 83 for 2 and lasted for an hour and 45 minutes. Lunch was taken during the delay, meaning only 10 overs were slashed from the original 50.

Bigger than the roars for the wickets of Shapoor was the introduction of Rashid Khan, who was serenaded with chants of "Rah-SHEED! Rah-SHEED!" But the wily Chanderpaul blunted the star legspinner, and the crowd's excitement simultaneously, with his arsenal of nudges and nurdles. Chanderpaul was forced off injured after being struck on the body attempting a pull against Dawlat Zadran in the 25th over. Samit joined Hain and the pair continued to keep Afghanistan's bowlers at bay.

It wasn't until the slog overs that Afghanistan's spirits were lifted once again in the field, rattling off a series of wickets caught in the deep to restrict MCC. Hain finally fell to end the 34th, pulling Gulbadin Naib to deep midwicket. Chris Read fell two overs later going after Shapoor for another caught behind. Samit slogged Rashid to the deep midwicket rope in the 38th for a well-made 52 and Naib had Yasir Shah edging behind on a big heavy with two balls left in the innings.

After going wicketless in the field, most of the crowd were looking forward to Mohammad Nabi coming out to showcase his skills with the bat. Listed at No. 4, he never got the chance as rain ended play after just five overs of the Afghanistan chase. Noor Ali Zadran was the only wicket to fall, chopping on in the third over. After waiting for more than 90 minutes, the fans were delivered the inevitable news that there would be no more play. But it may have been enough of a taster to make them hungry for a return visit, possibly as soon as the 2019 World Cup.