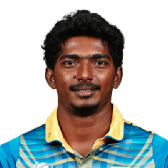 3.24pm After failing to defend a target of 317 in the series opener, Sri Lanka have bounced back to level the series with a crushing win. It was set up by the two spinners - Lakshan Sandakan and debutant Wanidu Hasaranga. They befuddled Zimbabwe's batsmen with their variations. The sweeps and reverse-sweeps, which reaped rich reward on Friday, let the visitors down today. Sandakan claimed his first four-wicket haul in ODI cricket, while Hasaranga became only the third player, after Taijul Islam and Kagiso Rabada, to claim a hat-trick on ODI debut. It all seemed like a blur. Just ask Cremer's men.

Zimbabwe also have to deal with the anxiety of Chatara leaving the field because of a possible knee injury. Tharanga then anchored the chase of 156 with his third successive fifty. You can read all about that in Fidel Fernando's report, which will be updated shortly. Do stick with us for the presentations.

Sandakan, Man of the Match: The captain gave me a lot of confidence and I bowled really well. We planned to bowl a bit slower and we executed it in the middle. And well bowled to Wanidu Hasaranga who had a dream debut.

Cremer, Zimbabwe captain: We thought the wicket was a little bit different. Maybe 230 would have been a good score. It was just one of those days. Sri Lanka bowled well, credit to them, and maybe we need to look at the other options [apart from the sweep]. Like I said, 150 was not good enough on that wicket.

Mathews, Sri Lanka captain: I wouldn't call it a clinical performance. We still dropped catches. The attitude and intensity was superb, though,. We just need to regroup, and it was great effort from the boys. Sandakan was absolutely brilliant, so was Wanidu. Credit should go to the selectors to pick him. I, honestly, haven't seem him much. Chasing a modest total, is not easy if you lose a couple of wickets early on. We can't thank Upul enough. He has moved up and down the order to accommodate others. He has been an unlucky player. Can't thank him enough.

Right, the series is level at 1-1. Hope you enjoyed our coverage as much as we did bringing it to you. Do come back for the third ODI at Hambantota on July 6. Until then, this is Deivarayan Muthu signing off on the behalf of Akshay Gopalakrishnan.

Varun: "Zimbabwe have been on the receiving end of a 'hat-trick on debut' twice now (previously against Taijul Islam)!"

Lovemore Siband: "it's impossible to sit on the fence here, Zim were completely outplayed in all departments. SL were playing around like a lion hunting down a springbok."

Eugene LaBrooy: "Can we now shake hands with Malinga and say to him, "thanks for coming" ? Or does he get another match?"

Hibshy: "Well tharanga is certainly sending a message to chandimal. Be consistent or be in the sidelines"

Samraat: "whenever gunathilaka and mendis haven't scored the runs. dickwella has scored runs. interesting. SL need to learn to click in unison though."

30.1
4
Cremer to Tharanga, FOUR runs, Tharanga seals it for Sri Lanka! The series is now level at 1-1. Cremer lobs a low full-toss on middle, Tharanga brings his dexterous wrists into play, whipping it away to the left of mid-on. Sri Lankan fans go berserk in the banks of Galle