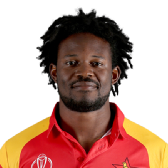 Normally the outcome of a Sri Lanka v Zimbabwe match is among the more straightforward to predict. Sri Lanka may not always be among the best one-day nations, but they have in the past been adept at putting away the weaker sides - star players rarely passing up the chance to buff their stats a little.

This time, however, Zimbabwe may have an opportunity. Not only has the opposition ventured a green squad, Sri Lanka are also in some turmoil - the head coach having been pushed out by SLC, and their spearhead having been effectively placed on probation. On top of all this, the side was also subjected to uncommonly caustic criticism after their Champions Trophy exit, which was seen to be the result of poor fielding.

Zimbabwe, meanwhile, come into the series with the unusual record of having won almost as many matches as they have lost this year - though both of their series so far had been against Associates. They narrowly lost the five-match series against Afghanistan, going into the decider tied 2-all before Afghanistan's spinners made short work of them in Harare. And though Zimbabwe lost the first match to Scotland in Edinburgh two weeks ago, they romped to a six-wicket victory in the second game, and followed that up with a 2-1 win in a List A series against the Netherlands.

Still, despite their depleted state, Sri Lanka will be the more confident side in the approach to the game. Even if things go badly for the junior players, in Lasith Malinga, Angelo Mathews and Upul Tharanga, they will feel they have enough experience to prevail.

Lasith Malinga has been at the centre of the fallout from Sri Lanka's Champions Trophy exit, and will be especially keen to underscore his value to the Sri Lankan team, following a frustrating campaign in England. Zimbabwe are just the kind of opponents he could bounce back against. Though many in Zimbabwe's XI have played against him before, they will not have faced him at length. And while he's not as quick as he once was, the yorkers remain accurate, and the slower ball is still difficult to parse.

Though he didn't play in that five-match series against Afghanistan, captain and legspinner Graeme Cremer has recently put together an impressive run of form - taking a five-for in that ODI victory against Scotland, having also claimed 14 wickets in six List A games for the Mid West Rhinos in Zimbabwe's Pro50 competition. He has not taken a wicket in two previous matches in Sri Lanka, but may perhaps break that duck on a Galle pitch that has traditionally been known to take turn.

Amila Aponso, the left-arm spinner who impressed against Australia last year, was a late addition to Sri Lanka's squad. With so many young players in the mix, the XI is difficult to predict, but is likely to feature a healthy phalanx of spinners. Danushka Gunathilaka will likely open alongside Niroshan Dickwella, displacing Upul Tharanga to the middle order.

Zimabwe have played with an unchanged XI in three consecutive wins against Scotland and the Netherlands. They may opt for that combination again.

The Galle pitch is unlikely to be the snake pit it is in the back end of Test matches, but is likely to take some slow spin. As ever during this time of year, there is a chance of showers in Galle.

"We rely heavily on our spinners. If there's a bit of spin we can exploit that. After the Holland and Scotland tours we found that we have lot of batting depth. We bat all the way up to number ten."
Zimbabwe captain Graeme Cremer on why his team might enjoy a little extra turn from the Galle surface

" Consistency is something we are looking for, and we saw it in the Champions Trophy where we didn't meddle with the batting order too much. It's one aspect we are not trying to experiment too much with. We will try and go with the same six to eight batters in the next few months."