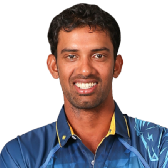 Sachithra SenanayakeSri Lanka
'We are quite rusty' - Sammy

That's all we have for you tonight. Thanks for joining us and we hope you come back for the remaining T20 in Colombo on November 11. Till then, Goodbye

"Thanks to all the batsmen," says Lasith Malinga the SL captain. "They realised these conditions are hard to bowl in and they put up a good total for us. After that we knew they had good big hitters and everyone was planning to how to handle them. It was hard to bowl with a wet ball, but still at the end of the day I am in the winning side. Thank you for the bowlers and the batsmen. I realised even when the Test matches were going on Siriwardana took crucial wickets. Good all-round cricketer for Sri Lanka in the future. I am getting fit, need to do more for the national team and need to put in big performances before the world cup"

"We were right there, but with better planning with the batting order we could have gotten closer," says Darren Sammy. "But well played to Sri Lanka. They posted a very big total, they put up more than 200. We always backed ourselves to chase down any total. Andre Fletcher player really well, Kieron Pollard and Dwayne Bravo had a good partnership. But we lost wickets in clumps. Looking at the players in the T20 squad, there is a lot of experience and the players have played a lot of cricket in the format. Now we move to Colombo. Good luck to Sri Lanka today"

"I am so happy to take the most wickets, it was so tough, it was raining sixes. It was the pressure of the situation. With the wet ball, it was hard to grip as well. I think I did well enough," says Sachi, the Man of the Match. "The sixes are too easy for them, so I wanted to vary the pace and just keep them to single. I knew if I bowled short of a length or fuller, they will hit me so I just wanted to change the pace"

11.44 pm This game was supposed to be done a lot longer. But rain had the first say, and then Sri Lanka's batsmen took over. First Dilshan, then Chandimal and finally Mathews to post their teams best total against West Indies and the second-highest aggregate in the last five-overs in all T20Is (84 runs, England have the record)

Then scoreboard pressure combined with occasionally brilliant, and largely decent bowling. Even with their litter of big-hitters, West Indies were well short. The only positive perhaps was Andre Fletcher showing he has the stripes for T20 circket with West Indies' fourth-fastest fifty in the format. They got 185 on the board still, but it was well short of what they needed. Five matches on this tour, all five lost. Not happy times.

Shaheer: "NO wonder KS & MJ walked away having seen these Young blood in the system already. Just a matter of months and the team is Heading to new heights."

WI Supporter: "All teams are using WI to move up the rankings. WI moving in the opposite direction."

Andy: "Did Kapugedara even touch a ball today. Didn't spot him in any of the significant events." --- Check up on 11.3.

19.5
W
Jayasuriya to Narine, OUT, and bingo was his name-o! Sri Lanka will retain their No. 1 ranking in T20s. Quick and on target, it was seam up as well instead of the offie. Narine misses, Shehan hits