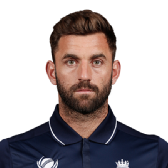 England win by three runs and clinch the series with a match to spare. They celebrate, but there's no doubt some relief in there, too. It did not look like Pakistan would get anywhere near this close after England's spinners had tried down the middle overs. Then, however, Afridi had an eight-ball blitz and the last two overs were full of mayhem and madness. Wonderful entertainment for the full house. But, in the end, Chris Woakes just managed to hold his nerve having been taken apart from Afridi (but also removing him, it was that sort of day).

Right, I'm off for a lie down. You'll be able to read George Dobell's report of all the fun here. We will be back for the final match in Sharjah on Monday which completes this tour and series. For now, though, from Andrew McGlashan it's goodbye

19.6
0
Woakes to Anwar Ali, no run, swing and a miss! England hold on for the series. It was actually a length ball outside off, Anwar had a mighty heave but couldn't make contact.

19.5
1
Woakes to Sohail Tanvir, 1 run, on leg stump, he swings hard but he picks out long leg! Oh, boy, it was there to hit...picked out Plunkett on the boundary

Five to win. Four for a Super Over. Hypocaust: "This has been glorious, ridiculous entertainment. A perfect T20 match."

19.4
1
Woakes to Anwar Ali, 1 run, full outside off, well bowled, Anwar can only drill it down the ground to long off

mohsin: "getting to see everything. now one handed shot. super over is on the way boys"

19.3
1
Woakes to Sohail Tanvir, 1 run, full outside off, driven to mid-off who is on the edge of the circle

19.2
4
Woakes to Sohail Tanvir, FOUR runs, on the pads, poor delivery, it's one-handed swing over square leg and it dribbles into the rope

Hamzah: "My family has gone mad....this game has been epic! Edge of the seat stuff!!"

Woakes is on a hat-trick. What a ridiculous game

19.1
W
Woakes to Sarfraz Ahmed, OUT, first strike to Woakes! Sarfraz trying his favourite sweep, it was full outside off, he's right across the crease and basically hits it straight into his stumps.

Here's the equation: 11 needed off 6 balls. Who has got the nerve? A tie means a Super Over we are told. Woakes to bowl...