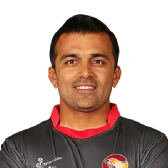 At 43 years and 162 days, UAE captain Khurram Khan became the oldest player to score an ODI hundred, his unbeaten 132 helping the team to a six-wicket victory against Afghanistan in Dubai. Khurram broke the record in the 40th over of UAE's chase, first slogging away a Mohammad Nabi delivery away to midwicket for four to reach 98, before cutting the next delivery to run two and overtake Sanath Jayasuriya in the list.

Set 281 for victory, the hosts lost their openers Amjad Ali and Andri Berenger early, but counterattacked through a 160-run partnership for the third wicket between Mohammad Shahzad and Khurram. Shahzad played the more patient foil in the association, at one stage going 21 deliveries without a boundary, but opened up as the innings wore on, collecting 14 runs off an over from Mirwais Ashraf. He overall muscled 10 fours and a six during his 79, but had to depart after edging Dawlat Zadran back to the keeper. Khurram, though, carried on, having timed his innings perfectly.

He began on the front foot, slamming five fours in the space of seven deliveries, but was more content picking out singles to keep the score ticking during the middle overs. UAE still needed 89 when Shahzad was dismissed, but Khurram received ample support from Saqib Ali, as the pair's fifth-wicket association yielded 76 runs, sealing the win with 10 balls to spare.

Khurram's heroics meant that Nawroz Mangal ended up on the losing side despite compiling a lively century of his own. Mangal stroked eight fours and four sixes during his 123-ball 129, and put up big stands with Afsar Zazai (51) and Samiullah Shenwari (25) to lift the visitors to 280 for 8. Krishna Karate was the pick of UAE's bowlers, taking 3 for 45.