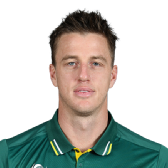 That is all from this game. Good bye

AB de Villiers: "Little angry with myself for getting out. Those totals are always tricky to chase. I like to be positive when I come into situations. I was confident in the boys. I was not happy that I let them down. I love to finish games. Felt the guys were calm to start with and recognised the key moments. Very happy for Morne Morkel. Behardien really played his role today."

Bailey: "Just not enough runs. I can't remember getting too many drives and cuts, it was the pressure that built up. Large gap between our best and worst at the moment." Bailey says it was a combination of good bowling from South Africa and poor batting from Australia, adding that many of his batsmen could not say they had got out to great deliveries.

Morne Morkel is the Man of the Match. Morkel: "To start well was important, in that first over. Always love to bowl at the WACA with the bounce. To take a five-for against this quality line-up is going into the memory bank for me."

Australia fighting till the end but they just didn't have the runs. Rossouw calmed the early nerves with a polished 30, AB took over and twinkled his way to 48 off 41, and Miller kept his nerve in the end with an unbeaten 22. The series is tied 1-1 going into the third game in Canberra

Selwood: "In the end it was all about the C-word again for South Africa. But today that C-word was Coulter-Nile, and it won them the game"