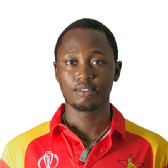 Zimbabwe allowed Pakistan to claw back into the match in the third session of the second Test in Harare after keeping the bowlers at bay for two-thirds of the day. The hosts had survived a treacherous morning session with only the loss of their openers before half-centuries from their senior batsmen, Hamilton Masakadza and Brendan Taylor, took them to 165 for 3 at tea. However, five wickets in the final session undermined the earlier good work.

Junaid Khan provided the first of the five breakthroughs when he had Malcolm Waller caught behind soon after tea, but it was Abdur Rehman who made the crucial dismissal when he trapped Taylor lbw while on the sweep. Taylor, who had been dropped at mid-off by Rahat Ali in Rehman's previous over, was a touch unlucky though as the ball hit him marginally outside the line of off stump.

But there wasn't much resistance from Elton Chigumbura and Richmond Mutumbami, the last of the recognised batsmen, and Zimbabwe's innings was caught in the downward spiral. Tinashe Panyangara and Prosper Utseya scored useful runs against the resurgent bowling and survived long enough to ensure the team will come out to bat on the second morning.

The pitch, which was thought to be under-prepared, mostly stayed true on the first day. The final score could be much less than what seemed possible at one stage, but with the nature of the pitch still unknown, it could be a good first-innings total.

For Zimbabwe though, apart from Masakadza and Taylor, none of the batsmen were able to apply themselves against Pakistan's tenacious bowling. Masakadza and Taylor had come together at the dismissal of Vusi Sibanda with the score on 31, but added 110 to settle the nerves after initial jitters. The century partnership between the two was a story of two halves: the first dominated by Masakadza and the second by Taylor.

In the initial phase, Masakadza looked to score freely while Taylor soaked up the deliveries. He stayed back against the spinners, but was quick to pounce on anything tossed up, preferring to hit over the infield. One such shot took him to his first half-century against Pakistan. Two overs later, he punched a quicker one to the cover boundary to bring up the fifty of the partnership, with Taylor scoring only 7.

In the next half though, Taylor assumed the role of the aggressor, announcing his intentions with aerial boundaries off Saeed Ajmal and Rehman. The run-rate hovered around 2.5, but when the opportunities came, Taylor made sure he was ready. He reverse-swept an Ajmal doosra, then creamed a full delivery from Rahat Ali to the cover boundary. When the partnership reached 100, Taylor had taken over the scoring, with 32 runs in the second fifty.

The free-scoring came after the batsmen had warded off the threat from Pakistan's seamers in the first session when the ball was darting around. Zimbabwe lost their first wicket off the second delivery of the day and only two runs were scored in the first 40 minutes.

The first over, bowled by Junaid, was almost unplayable and accounted for the wicket of Tino Mawoyo as the batsman was squared up by one that cut across him. The umpire was convinced the ball had taken the edge after the Pakistan team went up in a loud appeal. Replays showed that the ball might have hit the thigh pad along the way and not the bat, but Mawoyo, who has had a poor run of scores opening in Tests, had to go.

Rahat started in the same vein from the other end and with plenty of movement on offer, kept the batsmen guessing, as ball after ball, the batsmen played and missed. He bowled a slightly fuller length and a wider line than Junaid, and induced as many errors, but earned the wicket of Sibanda with a short one. He came back to pick another wicket towards the end of the day with the new ball.