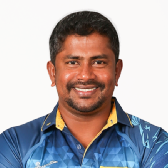 A day that began on even terms finished being one-sided. New Zealand's fast-bowling stocks may be promising but their batting continued to be a serious worry and it let them down again, on a day when they had the rare chance of pressing ahead and aiming for a win. They slumped to a fifth straight Test defeat in conditions far less lethal than their scoreline suggested. The batsmen were largely victims of their own approach and lack of confidence against spin on a slow and low pitch.

Rangana Herath was again the wrecker-in-chief, continuing his incredible run in Galle, and finished with 11 wickets in the match. Both his hauls of ten wickets or more in a Test have come in Galle, where he's picked up 46 in eight games at 20.30, including five of his 12 five-fors. His achievement wasn't a surprise, certainly not against an opposition whose performances against spin have been woeful in the recent past. In their last five Tests, all of them defeats, they've lost 62 wickets out of 100 to spin. Only one of those games went into the fifth day.

Sri Lanka were disciplined and cut down drastically on the bad deliveries they had delivered on the opening day when Brendon McCullum and Daniel Flynn had managed to find some release after the loss of early wickets. There was hardly any swing or movement for the seamers, and the ball never carried to slip, though the spinners found a fair amount of turn. The overall result of their tight lines and variations in pace and length was a stagnating run-flow and an eventual collapse.

At a time when New Zealand would have been aiming to begin solidly and lay a platform for a challenging lead, they were hit by a Nuwan Kulasekara double-strike. Martin Guptill was dismissed in a manner similar to the first innings, when he played down the wrong line, only this time he was bowled. Kane Williamson was a touch unfortunate to be caught down the leg side, when he tried to glide one down to fine leg and New Zealand were reduced to 46 for 3.

Ross Taylor square-drove the seamers for two fours and looked comfortable against Herath while defending, and he and Flynn appeared to infuse a bit of urgency to an innings that badly needed a fillip. But there remained some uncertainty against the spinners. Herath got one to spit away and bounce past Taylor's bat, and that may have played on the batsman's mind when, shortly after, he misread an arm ball from Herath to be trapped in front.

James Franklin had spent some time on the pitch before the start of play, standing on the crease and scanning the areas he could score off. He appeared to come out with a plan, as he stepped out to Herath, often to try working him on to the leg side. That prompted Mahela Jayawardene to employ two midwickets for him, but Franklin was undeterred. It did not pay, as he was beaten in flight to be stumped, albeit unconvincingly, by Prasanna Jayawardene - he failed to collect but the ball ricocheted off his chest and dislodged the bails.

Flynn was the most confident and enterprising of New Zealand's batsmen today, picking out midwicket as a favoured scoring area, fetching deliveries from outside off, piercing the field on either side of the wicket and trying his utmost to rotate the strike. But he was taken by surprise as Herath turned one in sharply and bowled him through the gate. When Doug Bracewell failed to pick an arm ball next ball, the end was nigh for New Zealand. The desperation to stretch the lead and give themselves something to bowl at was evident when Tim Southee and Trent Boult went over the top and struck three sixes between them, but they too succumbed to spin, only managing to extend the advantage to 92 runs.

An early burst from the seamers was New Zealand's only hope - somewhat dented from the outset by Tim Southee's absence due to a niggle - but a presumably nervous Sri Lanka opening partnership, on a pair, ensured the chase was smooth. Tharanga Paranavitana had just one half-century in his previous 11 innings and would have been under pressure. He was subdued to begin with but eventually got going, using his feet well against Jeetan Patel to launch him for six, before smashing Bracewell over point towards the close. He stayed through to the end of the chase, but it'll be interesting to see how the combination changes should Tillakaratne Dilshan return to the line-up in the next Test.

Paranavitana could face competition for that opening slot from the debutant Dimuth Karunaratne, who did his own prospects no harm with an attractive half-century. He was edgy at the start but looked strong on the back foot, punching boundaries through midwicket and extra cover and even pulling in the direction of square leg. He also cashed in on some freebies on leg stump and eased to a maiden fifty.

The day was a fulfilling one for Sri Lanka, and the hope of a closely-fought game raised by New Zealand proved deceptive in the end.