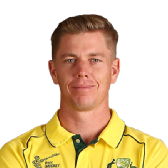 This is Abhishek Purohit signing off. Join us for the final ODI on Monday at 2.30 pm local time. Cheers

That will be all from us for this game. There is some football going on though in another part of the world, it happens to be called the EPL. Follow all of today's action on our sister site ESPNSoccernet and you can also see all of yesterday and today's Premier League goals for free on the new ESPN Goals app.

If rugby is what excites you, you can follow action from this afternoon's clashes between South Africa and New Zealand, Scotland and Italy, and Ireland and France on ESPNScrum, as the build-up to the Rugby World Cup continues.

Clarke: "Great performance with the ball, Marsh won the game pretty much on his own, he played the two T20s, was training really hard, faced a lot of spin in the hands, and deserved his chance. Doherty was fantastic, Lee took four as well. Another game for Australia [coming up], and we would like to finish 4-1."

Xavier Doherty is the Man of the Match. Doherty: "Obviously coming from Australia, was looking forward to bowl in these conditions, was nice to get some wickets today after getting a bit of tap in the previous game. Just [looking] to focus more on one-day cricket, so far so good."

Dilshan: "We cannot get out for 130, we bowled well, cannot ask bowlers to defend 130 against a strong batting line-up. I think Prasanna has a good future for Sri Lankan cricket. Clarke batted really well."

Kumar Sangakkara gets a memento for playing 300 ODIs

Australia have back-to-back series wins in Sri Lanka, they won here in 2003-04 as well. It was a pretty safe chase till Marsh's dismissal led to two more wickets in the same over from debutant Prasanna. Sri Lanka's thin batting line-up caved in cheaply after Sangakkara fell, and there was no getting back from that.

Ahmed: "I assume this is the first time that 2 brothers got out to the same bowler in same match in same over with some score on board & scoring same number of runs."

ryan: "ah D.Hussey's failure taken in isolation is nothing, but really has he played a substantial innings yet for australia? More tothe point he looks out of depth, bring on Ferguson!"

27.6
4lb
Malinga to Clarke, 4 leg byes, full down the pads and he gets it away fine on the leg side, that will do for Australia
27.5
1
Malinga to Haddin, 1 run, eep, that was fired in and headed high and full for Haddin, but dipped on him late and he got it towards square leg off the thigh pad
27.4
4
Malinga to Haddin, FOUR runs, slings it full and wide, and Haddin goes after it, gets it high in the air but it clears the infield and trickles in to the deep cover boundary
27.3
0
Malinga to Haddin, no run, another yorker, a bowling machine could have deviated but not Malinga, on off stump and he digs it out
27.2
0
Malinga to Haddin, no run, almost sneaked through, tails in full on off stump with unfailing certainty, Haddin gets some bat on it, he was late in getting down on it
27.1
1
Malinga to Clarke, 1 run, coming in late and goes down the pads full, Clarke picks it away to long leg

Punter Fan: "What the???? Well I did tell you Haddin would be coming in - only 10 runs - can we make it?" Malinga is back, Sri Lanka need five wickets, Australia ten runs, slip in place