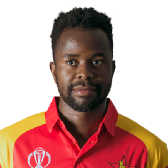 That's it from us for this game. Join us for the 2nd ODI from Harare at 9.30 am local time (1.30 pm Bangladesh time). This is Abhishek Purohit signing off for the moment. Cheers

Brian Vitori is Man of the Match on debut. Vitori: "I had seen these guys in the Test so I had an idea of how and where to bowl. I found that these guys like to play the heaves a lot, so I was trying to mix things up. I am enjoying it."

Brendan Taylor: "We would have loved to finish it three or four down. Vusi put his head down and batted through and Brian was brilliant upfront. We thought we might something out of the wicket upfront, which Brian did, I would not have been disappointed to bat first on that wicket as well. We saw Rubel reverse the ball well."

Shakib Al Hasan: "We have to bat better, I thought 250-260 would have been a good total. The batsmen need to step up and put on a good show."

Brian Vitori and Vusi Sibanda starring for Zimbabwe, Vitori ran through Bangladesh with a four-wicket burst at the start, and Sibanda was all dancing feet and flashing blade against the left-arm spinners despite the early loss of Taylor. They could have so easily got bogged down, but he saw them through despite a stirring display of swing with the oldish ball from Rubel. They would have liked to be more clinical in the chase, but after having faltered so often against the Bangladesh slow left-armers in the past, the win will be satisfying.

Vusi Sibanda: "It's just the confidence that I have to take it in to the one-dayers. It's always the key (taking on the Bangladesh spinners) as you cannot let them settle down."