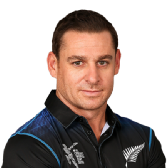 Taylor: "Guptill and Franklin lay the foundation for the rest of the innings. Woodcock adds another spinning option to our ranks. It's a small ground but we fielded well, especially Nathan, Jessie and Guptill. We've had a few go against us in the recent past so we would like to go for the whitewash. The death bowling today was outstanding."

McCullum is the Man of the Match: "The track just skidded a little under lights and it was good to get a few wickets. Our boys caught pretty well tonight."

That's all from us folks. Thanks for tuning in, see you for the next Twenty20 international, a dead rubber in Christchurch, in a couple of days. Until then, it's goodbye from all of us at Cricinfo.

We'll get you the presentation details in a bit, so stay tuned. Watch this space for the updated bulletin from Andrew Fernando.

It was the late surge in the batting that set it up for them, and the bowlers, despite getting tonked around in the first six overs, did well to contain the visitors during the chase. Both Woodcock and McCullum restrained the batting after Hafeez's run-out, and with wickets falling at regular intervals, three in three overs at one point in time, there was little Umar Akmal could do to revive his team. A relieving series win for New Zealand after a torrid time over the last couple of months. They've back home and they're regaining their touch.

Three slips and a leg slip

Can he grab two hat-tricks in consecutive games?

19.3
W
Southee to Wahab Riaz, OUT, another one, Southee's on a hat-trick again, length ball and it's smacked straight into the palms of McCullum at long-on,a repeat of the previous ball

19.2
W
Southee to Umar Akmal, OUT, gone, holes out to long-on, pitched up on middle and it's lofted straight to the fielder in the deep, comfortable catch to McCullum, an off day for Akmal with the bat though he kept really well

19.1
1
Southee to Wahab Riaz, 1 run, played down towards deep midwicket for a single

The game's been decided but we have to wait for a nominal last over. Was that run-out of Hafeez the turning point? Probably was.