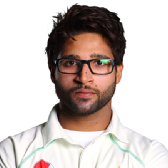 Albert Einstein believed doing the same thing over and over again and expecting different results was the definition of insanity. As such, it seems to be insane to have organised five ODIs between Pakistan and Sri Lanka. They've done this three thrice so far, and a different result is nowhere in sight.

This match was the most decisive of the lot, an all-round masterclass from Pakistan helped them ease to a series win over Sri Lanka by seven wickets, with more than seven overs to spare. Hasan Ali's five-for helped bowl Sri Lanka out for 208, before a debut century by Imam-ul-Haq - just the second Pakistani to achieve that feat - made this game a heavily one-sided affair. Pakistan cruised to their seventh successive ODI win, while Sri Lanka slumped to their tenth straight defeat.

Not my fault I am Inzamam's nephew - Imam-ul-Haq

When Pakistan's squad for the ODI series was announced, Imam-ul-Haq's selection came under scrutiny given he is chief selector Inzamam-ul-Haq's nephew. Imam was given a debut in the third ODI on Wednesday and after becoming the second Pakistan batsman to score a century on debut, the 21-year-old said performances were the best way to answer any questions over his place in the side.

"It's not my fault that I am his nephew," he said. "The only thing I can do is try. I am not answerable to everyone for this. The best way is to perform. There will be some failures, and I am not afraid of that because failure is a part of every cricketer's life.

"It doesn't make a difference to me. I have a lot of self-belief. I have domestic performances and an Under-19 World Cup to back me. People talk, and in some ways they are doing their job and I respect them but one has to go out and perform. If I don't perform in the next game, this kind of criticism will be leveled again, so I don't pay it much attention."

Pakistan needed no more than sober level-headedness in their modest chase. Fakhar Zaman and Imam provided more than just that. Imam looked unperturbed by the enormity of the occasion and wasn't afraid to hit in the air. Although he was uncomfortable against offspinner Akila Dananjaya at times, it was a generally chanceless innings that would have undoubtedly eased some pressure on his uncle and chief selector Inzamam-ul-Haq.

Zaman was stumped attempting a wild heave over midwicket after the openers added 78. But the hosts did not collapse like Sri Lanka after their opening partnership was broken. Imam simply grew in confidence, coming down the wicket to neutralise the spin, and continued to take the attack to the opposition.

Babar Azam added 30 and went, but there was no twist in the tale. The outcome was a forgone conclusion long before the winning stroke was played. The only excitement towards the end was the wait to see the 21-year old Imam complete his debut hundred. And he nearly didn't.

In the 37th over, a peach of an indipper from Dushmantha Chameera took his inside edge, when he was on 89, and settled in the wicketkeeper's gloves. Imam whipped around to watch it happen and began shuffling off the field well before he was adjudged out. The on-field umpires, however, asked him to wait as he made his inconsolable trek back to the dressing room, saying they wanted to check the legality of the catch. With each passing replay it seemed a little bit of the ball had touched the ground before Niroshan Dickwella had taken it. The big screen finally flashed "not out". Both the Abu Dhabi crowd and Imam himself heaved a sigh of relief. And he knocked off the remaining 11 runs without further trouble to soak in all the emotion.

Earlier, Sri Lanka started brightly, as if liberated by not having a target to chase. Upul Tharanga's touch looked to have never left him since he carried his bat in the previous game. He drove Junaid Khan and Rumman Raees regularly through the offside, his timing allowing him to score regular runs past mid-off.

He put on 59 with Dickwella in 10.5 overs - it was the first fifty partnership at the top of the order for Sri Lanka in seven games - but Hasan broke through just as it began to look ominous. He bowled Dickwella, who was slightly unfortunate considering the ball had kept low.

That, right there, was the end of the good times for Sri Lanka. They slowed down considerably, the new batsman Chandimal needing to settle and the set batsman Tharanga beginning to stutter. It seemed that Sri Lanka, having seen clumps of wickets fall early in the first two games, made a point of prioritising wickets in hand over run rate.

The result was a familiar sight. Pakistan's spinners wrestled control of the middle overs and began to asphyxiate the batsmen. Chandimal made a painful 19 off 49 balls, and there was a sense of inevitability when he was out lbw after misreading a Shadab Khan googly.

Sri Lanka's run rate, once over six, had dipped below four. Tharanga, not having played an aggressive shot for the best part of 20 overs, pulled a long hop from Shadab straight to deep square leg. With a dull sense of familiarity, the visitors began falling apart, again. No one was able to get used to the slowness of the Abu Dhabi pitch or throw the Pakistan spinners off their nagging lines and lengths.

The fast bowlers were back to finish off the middle order, with Chamara Kapugedera, Milinda Siriwardana and Jeffrey Vandersay all falling within 12 balls. Hasan and Junaid were the men responsible, making all three batsmen mistime their shots. Suddenly, Sri Lanka were 141 for 6 in 36 overs, and even 200 seemed an eternity away.

Hafeez got rid of Thirmanne - a particularly unfortunate dismissal as he cut a ball onto his boot which then ballooned into the wicketkeeper's gloves. Hasan removed Akila Dananjaya to wrap up his third five-wicket haul of the year and leave Sri Lanka reeling at 163 for 8.

A late flurry from Thisara Perera, finding five fours in his 37-ball 38 dragged Sri Lanka past 200 even as Pakistan's fielding disciplines fell apart. Several mistakes on the boundary allowed ones and twos to be turned into many more. Hasan restored the upper hand, snuffing out the resistance of tailender Dushmantha Chammera and ensured Sri Lanka couldn't put up a total closer to what they would have aimed. Thisara was the last man dismissed, run-out while trying to look for a non-existent second run. Pakistan had knocked Sri Lanka over within 50 overs again. In a few hours, they had knocked them out of the series.

No. of consecutive overs Tharanga was on the crease before getting out to Shadab Khan in this match. He carried his bat throughout last ODI for 48 overs and 27.4 in this.

No. of wickets for Hasan Ali in ODIs this year - the most, edging past Rashid Khan's 36. Vandersey was Hasan's 37th scalp of 2017 and he's also completed 6 three-wkt hauls in last 7 ODIs.

No. of Pakistan bowlers to reach 50 wickets in their ODI career in fewer games than Hasan Ali who's got it in 24 matches. Waqar Younis was the previous quickest, in 27 games. Overall, Hasan is the joint-4th quickest to the feat.

No. of players to score a century on ODI debut, including Imam-ul-Haq in this match. Saleem Elahi, in 1995, is the only other Pakistan player to do so.