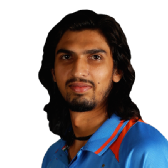 More legends watched live than Bangladesh scored runs. Two men went down with concussions. Ishant Sharma took his first home five-for in 12 years. Only the fourth time that fast bowlers took all ten for India in India. Wriddhiman Saha gracefully overcame all the late movement and apparent visibility issues. Cheteshwar Pujara and Virat Kohli then scored fifties to entertain the night-time crowd. Close to 50, 000 spectators turned up at Eden Gardens.

The first day of day-night Test cricket in India was unlike anything India had seen but eventually good bowling and good batting brought results with India needing just 57.1 overs to bowl Bangladesh out and then overhaul their woeful total of 106.

So poor was Bangladesh's planning for this tour that when a Mohammed Shami bouncer hit Liton Das, the only batsman who looked remotely comfortable, on the helmet, there was not a batsman in the squad that could replace him as the concussion substitute. Mehidy Hasan batted on as a substitute with an undertaking that he would not bowl to satisfy the like-for-like clause for concussion substitutes. That clause wasn't much of an issue when Nayeem Hasan was sconed by Shami: he was replaced by Taijul Islam, another spinner.

If anything, Bangladesh's batting had even less to recommend them by. And while Shami was landing physical blows, for a change Ishant was taking care of softened-up batsmen. Ishant did a substantial part of the softening-up himself through lovely Test-match bowling. He drew rewards through the legcutter-like delivery that he had unleashed during the Indore Test: four of his wickets came with deliveries that left right-hand batsmen or moved in towards the left-hand ones.

ALSO READ: The Saha masterclass on keeping against a swinging pink ball

There were times, especially in the first half-hour, when it seemed the pink ball wasn't going to do much, but there were others when it went off the seam outrageously. India had to wait till the seventh over to get their first success, but that remained the longest partnership of the innings. It was the new Ishant meeting the vintage one when it ended. Going around the wicket, he went past the outside edge three times before trapping Imrul Kayes with the ball that moved back in, past the inside edge but at an angle small enough for the ball to be hitting him in line and also not missing the leg stump. Ishant always moved it away, but this was his new-found toy that brought him this wicket.

Rohit Sharma then dove in front of first slip to pull off a blinder to send back Mominul Haque, but this was a false start for visibility concerns around the pink ball. Both Mohammad Mithun and Mushfiqur Rahim were late on the ball in their dismissals. Umesh Yadav snuck one past Mithun's inside edge, and Rahim played Shami on. The zing bails and stumps lit up pink.

Not only were the batsmen late on the ball, but it was also now moving outrageously, especially after passing the stumps, almost as if in England. Saha, though, remained flawless, moving even later than usual to track that movement. What will make the highlights reel, though, is his one-handed catch diving in front of first slip to send Mahmudullah back. Not only did he take the ball, but he also made sure his glove gilded along the ground instead of bouncing into it, which can make the ball pop out on impact. It was 60 for 6, but it wasn't even the lowest point of Bangladesh's day.

Shami now started to bowl dangerous bouncers. It was just before the middle session, the dreaded twilight zone when players have complained about the visibility of the pink ball. Liton was late on a hook, following which the physio gave him a concussion test that he apparently cleared. The next three balls he faced were 4, 1, 4, but he complained of unease again and had to walk off. The physio was still busy with Liton when Shami hit Nayeem too. The India physio had to come out and look after him. Nayeem batted through the innings but didn't take the field. It will raise questions about concussion protocols: it is important to get players off immediately and not risk a second hit in the time that they spent facing high-speed accurate bowling.

The tail was in no mood to get behind the line of the pink ball now, and Ishant made the most of it with legcutters aimed at the top of off. The 22 runs he conceded was the second-lowest for an India fast bowler for a five-wicket haul at home.

Lower in pace, lacking the accuracy, Bangladesh struggled to create any of the problems India did for Bangladesh. The dew would only make it more difficult for them. This was a time they would have hoped to be batting when they chose to bat first, but instead they were now primed for some punishment.

Yet there was a little bit in it for them: Mayank Agarwal edged when pushing at a wide one, and Rohit padded up to one that seamed back in. Pujara and Kohli were alert, though, and it didn't help Bangladesh that their cover fielder - mostly Mahmudullah - was ordinary throughout the evening. There were enough loose balls on offer for both batsmen to keep scoring at a fair clip. Pujara, though, got one that kicked at him to make it four straight fifties without a century. Kohli, who became the fastest man to 5000 runs as captain, played some delightful drives in his unbeaten half-century and looked set for a century.