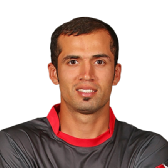 Rohan Mustafa returned figures of 5 for 26 to help United Arab Emirates bowl Netherlands out for 176, a score that was comfortably chased down on the back of Chirag Suri's patient 78, off 126 balls. The result pushed UAE to third in Group A, behind Ireland and West Indies. Netherlands have two losses in two matches.

Netherlands made a strong start after choosing to bat in Harare. Wesley Barresi and Max O'Dowd added a 52-run opening stand in 64 balls, before the team lost its way, losing four wickets for 30 runs. Ryan ten Doeschate's steady hand (34 off 60 balls) and cameos from Scott Edwards (27) and Pieter Seelaar (20) carried Netherlands to 176. Offspinner Mustafa dominated proceedings for UAE with an economical five-for and instigating a run-out.

Mustafa couldn't replicate his heroics with the bat, falling for 11 in the fourth over of the chase. UAE were put back on track with a 57-run second-wicket stand between Suri and wicketkeeper Ghulam Shabber (27). Three wickets in quick succession, though, gave Netherlands a chance. But Suri and Muhammad Usman snuffed out any hope they had with an unbeaten 93-run partnership.