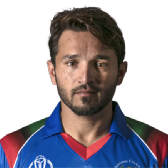 Afghanistan overcame a plucky United Arab Emirates in their Super Sixes match at Old Hararians to win by five wickets. Rashid Khan's 5 for 41 helped to bowl UAE out for just 177 in 43 overs, but Afghanistan slipped to 54 for 5 in their chase, and were put under serious pressure by UAE's new-ball bowlers, Mohammad Naveed and Qadeer Ahmed. A 124-run partnership between Gulbadin Naib and Najibullah Zadran repaired Afghanistan's chase, as UAE lost their appetite for a fight on a stiflingly hot afternoon. Both men passed fifty before guiding their team home with more than 15 overs to spare.

While UAE have lost all of their Super Sixes matches, Afghanistan's win takes them to four points, level with Ireland, whom they will meet in their final game on Friday. If they win that game by a big margin, and Scotland and Zimbabwe both lose their remaining matches, this victory will give Afghanistan a slim chance of making it into the final.

UAE quick Mohammad Naveed lost 15% of his match fee and picked up a demerit point for questioning the umpire's not-out decision during his side's five-wicket loss to Afghanistan.

Naveed was found to have violated Article 2.1.5 of the ICC code of conduct for Players and Player Support Personnel, which relates to "showing dissent at an umpire's decision during an international match". No formal hearing was held, as Naveed pleaded guilty to the offence and accepted the proposed sanction.

It seemed that the match might be over very quickly when UAE were asked to bat on a helpful surface and were reduced to 18 for 3 inside the Powerplay. Opener Chirag Suri dug in tenaciously, taking 72 balls for his 22, but it was not until Shaiman Anwar arrived at the crease that UAE started to show some real grit.

Fittingly, Anwar wore a a floppy sun hat, continuing a fine UAE tradition that started with Sultan Zarawani's incredibly brave decision to bat against Allan Donald at the 1996 World Cup wearing only a wide-brimmed floppy for protection. Disappointingly, Anwar traded his hat for a helmet when Afghanistan's quicks were on, but his knock was anything but disappointing.

Mixing stolid defense with daring attack, he reached a 69-ball fifty with a fiercely struck six down the ground off Mujeeb ur Rahman. Naveed's knock was even more adventurous, and he showed scant regard for Afghanistan's attack as he plundered seven fours and two sixes in his 45. But theirs were the only innings of substance for UAE, and Rashid took advantage of the batsmen's inability to read his variations to record his fourth five-wicket haul in ODIs. Rashid now has 96 wickets in this format, and needs just four more within his next nine ODIs to become the quickest bowler to 100 ODIs wickets in the history of the game.

So dominant had Afghanistan been with the ball - Naveed's 45 and Anwar's competent fifty notwithstanding - that much of the lunchtime chat around the ground revolved around how quickly Afghanistan might want to chase down the middling target to boost their net run rate.

But as Boycott's third law states, one should never judge how good a score is until both sides have batted on the pitch. Mohammad Shahzad, in his second match back from a demerit suspension during the group stages, didn't even last two overs before Qadeer Ahmed's bustling medium pace trapped him lbw. Energy buzzed through UAE after the early strike, and it quickly became apparent that this chase could be a lot more tricky than Afghanistan might have hoped.

Gulbadin Naib, elevated to No. 3, endured a particularly torrid time from Naveed. Naib struggled to lay bat on ball, repeatedly playing and missing, as Naveed found just as much lift and movement off the surface as Dawlat Zadran had earlier in the day.

Importantly, though, he did enough to survive, while Rahmat Shah kept the scoreboard ticking over with flicked boundaries on the leg side. But just as the pressure brought about by the early wicket seemed to be dissipating, UAE struck again. Naveed burst a quick length delivery through Shah's defensive push, tipping the bails off, sparking off a mini collapse. Naveed trapped Samiullah Shenwari lbw in the same over, and in the very next, Qadeer had a hooking Asghar Stanikzai caught behind as Afghanistan slipped to 43 for 4.

Mohammad Nabi has pulled Afghanistan out of situations like these in the past, but the drinks break seemed to break his concentration, and he nicked Ahmed Raza behind first ball after the resumption. With Afghanistan tottering at 54 for 5, UAE had the game by the scruff of the neck.

Naib, who had so obviously struggled against the new ball and watched wickets tumble from the other end, was joined by Najibullah, and despite a couple of early scares, they soon set about rebuilding the innings. Najibullah's boundary-hitting ability was particularly valuable, each hit bringing the target a little closer and allowing Naib the time and freedom to grind his way into some sort of form.

Najibullah was into double figures at better than a run a ball, his first boundary coming via a shimmy-and-swipe six over long-on off Ahmed Raza's left-arm spin in the 18th over. Najibullah also put the reverse sweep to good use, particularly against Imran Haider's legspin, and with his second six, he joined Naib in the 40s. Naib reached his fifty from 84 deliveries; Najibullah followed him to the milestone two overs later, from a more rapid 53 deliveries.

With the afternoon sun lifting moisture out of the earth, enormous billowing cumulonimbus clouds built up around the ground, and the extreme heat seemed to sap UAE's energy with the game slipping out of their grasp. When Rohan Mustafa let slip with a chest high no-ball, which was carted to the square leg boundary, and followed that up with a leg-stump half volley that was smashed to wide long-on, the white flag was raised. With the pressure off, Naib finally came into his own, lifting Naveed and Mustafa for massive leg-side sixes. His gritty innings won him the Player of the Match award, while Afghanistan's win kept them in the competition. Just.