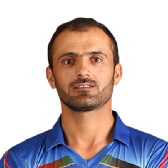 After a memorable three weeks in which they have gained global attention, Afghanistan's 21-run win over Namibia in Krugersdorp earned them official ODI status, although they failed short of sealing a spot at the World Cup as they could not beat Kenya's net run rate.

Afghanistan chose to bat and made 243 for 7 thanks largely to Mohammad Shehzad's 73 and the captain Nowroz Mangal's 78. Nine bowlers were used and they did well in the field, but that 87-run partnership between Shehzad and Mangal proved decisive. Afghanistan came out determined to win and their new-ball attack of Shapoor Zadran and Hamid Hassan nipped out early wickets.

Hassan finished an impressive tournament with 3 for 37, striking at the top, in the middle and at the tail, and received support from Zadran and Karim Khan. From 79 for 5 Namibia were resurrected somewhat thanks to Gerrie Snyman's 54 before Hassan and Karim hit back. After a remarkable year this win marked a commendable campaign by Afghanistan but now the challenge is to make the most of their four years of valuable funding and opportunity.

"When we came into the Super Eight we weren't in a very good position to qualify, but the way the boys played showed how much courage and talent they have got winning some much tougher matches," said Afghanistan's coach, Kabir Khan. "I am sure we will play in a World Cup one day.

"My first goal when we came into this tournament was to get into the Super Eight as we didn't want to be relegated. I thought it would be very hard to make the World Cup, playing against so many top sides in this qualifier, but finishing in the top six is an excellent result for us.

"It will help develop the cricketing culture in Afghanistan and there will be more cricket and we will have the opportunity to play four-day cricket (in the ICC Intercontinental Cup).We are not going home empty-handed from the tournament - we have managed to achieve our ODI status.

"I think four-day cricket brings out the true cricketer in everybody as in one-day cricket players may play bad shots against you chasing runs, but in four-day cricket you have to get the batsman out with your own qualities and skills.

"We will also benefit from the support from the ICC in preparing for these competitions. Our team is also very good in the short-form of the game and in Twenty20 they will be challenging a lot of the big teams. All their life in Afghanistan they have played 20 or 25-over cricket, so their games are well suited to this."

Praise was quick to arrive from other teams, with Scotland coach Peter Steindl pleased for their success. "Good on 'em. They've come a long way and have played in a lot of tournaments just to get this far, so any team that comes from Division 3 or 4 and works their way up to reach the top six, they deserve it," Steindl told Cricinfo. "You don't get there by luck, or without hard work and good performances, so good on them. I think we play them again in two days time," he said, with a nervous laugh, "so we look forward to that."

"They deserved the win [against Scotland] and have beaten Ireland as well. The one thing that's come out of the tournament is you can't take any team lightly. There's been surprises and upsets and also hard-fought wins by teams. It's a good state to be in for world cricket if you can have as many teams as this and still generate good cricket."

The achievement will also be a boost domestically and internationally for a war-torn nation. 'It's a great achievement by the Afghan cricket team to qualify for ODI status with such scant resources and shows the determination and resourcefulness of the people," Dominic O'Reilly, UK Director of the charity Afghanaid, told Cricinfo. "Those of us who work in and for Afghanistan know there is much more to the country than the fighting we see on news bulletins and the cricketers have demonstrated that. While cricket is currently a minority sport in Afghanistan, I'm sure the team's success will boost interest and give everyone there a lift."