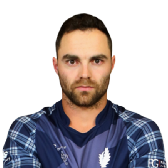 Preston Mommsen led Scotland into Group A for the 2015 World Cup, as his second century of the tournament secured an emphatic 41-run win over United Arab Emirates in the final of the qualifiers. UAE, who are the other team to make it to Australia and New Zealand, will join Group B.

Scotland join Afghanistan in Group A along with Australia, New Zealand, England, Sri Lanka and Bangladesh and get the benefit of a less tiring travel schedule. UAE will tussle with South Africa, India, Pakistan, West Indies, Zimbabwe and Ireland in Group B.

Mommsen's unbeaten effort gained in lustre when placed against how Scotland started after winning the toss - the top three were dismissed by the seventh over. But Mommsen limited UAE's momentum with a couple of fours within his first 15 balls and kept the score ticking. Regular peppering of the boundaries meant he reached his fifty off 60 balls with his first six. Freddie Coleman held the other end up in a 91-run stand for the fourth wicket before he succumbed in the 26th over.

Richie Berrington was busier, striking a 53-ball 63, as Scotland took charge in the final ten overs. They flayed nine fours and a six, swelled the total by 96 runs and their partnership to 138 off 134 balls. Mommsen reached his century in the 44th over and stayed till the very end, helping take 13 off the final six balls to push Scotland to 285.

UAE's chase began well, but was plagued by regular wickets. Swapnil Patil was among six players making their ODI debuts and he impressed with a run-a-ball 99. He was dropped off the penultimate ball and needed two off the final delivery of the chase to reach a memorable century, but could only edge to midwicket for a single.

Patil commandeered a wobbling batting effort - UAE were 73 for 3 in the 15th when he came in - and kept their hopes alive with a fifty partnership with Rohan Mustafa in the middle overs. But with the lower order providing little support - only No.10 Kamran Shahzad succeeding in keeping one end tight - the issue in question was Patel's landmark. He seemed good for it, biffing a couple of sixes in the final three overs, but fell agonisingly short.

"This is what dreams are made of," said Mommsen. "We had huge goals coming here and we've made it, so we have so much to look forward to and a lot to prepare for. I'm sure the experience of the last three weeks will be extremely valuable [in the World Cup next year]. "We're going to play some of the best teams in the world. But there will also be opportunities to hopefully get some wins, and cause a couple of upsets"

Khurram Khan, the UAE captain, would not be deterred by the loss at the last hurdle. "When we left the UAE, everyone said the conditions are not going to suit you, but I think they did a wonderful job coming here and qualifying. It was an amazing experience."