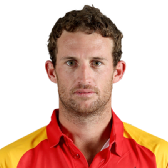 6.45pm That's it from us. Enjoyed bringing you a high-scoring game that proved more competitive than a lot of us may have expected at the start, and we hope you enjoyed our coverage too. We'll be back tomorrow for what promises to be a cracker between New Zealand and England. Do tune in, and keep sending in your comments. Until then, ta ta!

Elton Chigumbura: "Disappointed about the fielding, but our guys played well with the bat. I thought when Craig Ervine went into bat he was positive and brought the run-rate down and it made the job of the guy coming in easier. That's where we went wrong against South Africa. It's good to take the momentum from this game into the game against West Indies. Hopefully we can polish our fielding and have a good game in all departments."

Mohammad Tauqir: We played some good cricket but we were expecting a different result. I think this wicket, we saw the last game also, even 300 was not enough. We know our limitations. They batted well, had some good partnerships. Both the left-handers played well, and they won the game. I think overall the bowlers bowled well. One crucial partnership, I think it saw them through the game. If one of them got out it would have been a different result. It was a good learning experience, and I think we would like to put up a positive performance in the upcoming games."

Rutul: "This is type of temperament that Zimbabwe lacking previously. Stupendous stuff from Williams and Ervine to build a formidable partnership to not let the chase get out of hand and then good job by Chiggy to ensure the team got the W with ease. "

Lakshman Kumar: "Gotta feel for Naveed..! His first 8 overs went for just 27 runs and the decisive last 2 went for 33..!" I know. That too right after I called him the best bowler in their team.

Williams is the man of the match. "I tried not to feel the pressure," he says. "We lost wickets at the wrong stages, but the wicket was very good just to keep knocking the ball down the ground. The coach and I have been trying to talk about the sweeps [not playing them so much]. I've been trying to punch it down the ground and build innings. Some of their guys bowled really well to us, credit to them for making it difficult for us. Wicket was very good, to play straight. Anything across the line was difficult. Started to lose pace towards the end."

6.35pm For a while it looked like a tricky chase, but the partnership between Sean Williams and Craig Ervine took the game away from UAE. A comfortable win in the end, with 12 balls remaining, but this was still the closest game of the World Cup so far. UAE can be proud of the way they played, especially with the bat. Their bowling looked pretty good in patches, but there wasn't enough threat in it to break down this experienced Zimbabwe team.

Akshay: "I think i have found the perfect jinx against any player - picking them in my fantasy team. Always works."

Years since UAE last played in a World Cup. This is the second longest gap between World Cups (Canada, 24 years).

Khurram Khan's age, making him the third oldest player to play in a World Cup after Nolan Clarke (47) and John Traicos (44)