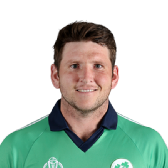 9.50pm Whew. What a match that was. I'll say it again. What. A. Match. More of this, 2015 World Cup. More of this. I'm off now, to breathe a little, and have a soothing pot of tea. Thoroughly enjoyed bringing you this game, hope you enjoyed following it too. Until next time, it's bye bye!

Moazam: "so Pakistan have to wait for Zim vs Ire match to decide whether they can qualify for the quarter-finals or not." -- And they'll also have to beat those two teams, and UAE as well, and maybe South Africa too.

Paul Price: "Hardly a cricket fan in the world could have been unimpressed by that. Games like that are a tribute to cricket, and proof that the game is on the up in the so-called smaller nations. So why have a smaller World Cup? We need to have countries like IRE and UAE showcase their skills on an international stage."

Samrat Ahuja: "Sample this scenario , last ball of the match and one run to win or tie for the batting side. Stuck on the pads, they try to steal a leg bye, umpire raises his finger! Batsman takes a review, and is adjudged not out, but since ball is dead after the umpire raises his finger, will they count the run taken by batsmen, will they repeat the ball again, or will the batting team declared as losing team?" -- It might well happen, Samrat. I dread to imagine the fallout of that!

William Porterfield (this is how best I could transcribe his thick Irish accent): "Closer than we'd have wanted, but we'll take a win any day of the week. Helped to have wickets in hand, especially when you have Gary Wilson and Kev coming in at the end. It was nice to get a win here, games will start coming thicker and faster, just have to keep up the performances." Fan question: Key factor in winning? "Scoring more runs than them."

Mohammad Tauqir: "Shaiman played a superb knock, to go from 130 for 6 to 280, the credit goes to him, brilliant innings. Both of them [him and Javed] played superbly. We know they are very good batsmen, especially Shaiman, coming lower down the order, and he proved it today. We bowled well up to 35 overs, and later on there was dew and the ball became wet, and it was a very good batting wicket and they batted well and it went to the wire."

Ben: "Gee wiz, could've given Anwar the MoM, he did make a ton after all."

Abhishek Ranjan: "I wish the bails had fallen."

Mike: "Well done Ireland: there's nothing like a mild heart attack to make lunch a bit more tasty! Our ability to make it difficult for ourselves knows no bounds, and our net run rate probably means we need two more wins to secure a quarter final place now, but two from two ain't bad. Superb innings from Gary. And as for Kevin: I'm old enough to remember when 50 from 24 balls was a big deal!"

Gary Wilson is the man of the match: "I've batted a lot with Kev, both at the county and the international level, and we dovetailed well together. We want four wins, all we can do is take each game as it comes."

Ankit: "I kinda feel sad for UAE. They have made good totals in both their matches. Started excellently with the ball, but in the end, one or two men snatch victory away from them. Last time it was Sean Williams, this time Wilson and O'Brien."

9.34pm A win by two wickets, with four balls remaining. This has undoubtedly been the match of the tournament. UAE were hamstrung (quite literally) by the injury to Guruge, but Ireland's middle and lower order had the experience and brought all of it to the fore in chasing down this tricky total. The UAE attack bowled brilliantly, but the efforts of Wilson and O'Brien took Ireland over the line in the end, just about. Ten teams at the next World Cup? No scope for a match like this then.

49.2
2
Mohammad Naveed to Dockrell, 2 runs, short ball, angling into the body, and Ireland have won it! He went for the uppercut, miscued it, but who cares? Cover turned around and hared back desperately to try and catch it, but that was always falling a long way away from him
49.1
1
Mohammad Naveed to Cusack, 1 run, backs away and slaps the full ball to mid-off. Goes for the single, and the throw from mid-off misses at the bowler's end. He was nowhere in the picture!

Mohammad Naveed to defend three runs off the final over. Alex Cusack on strike.

48.6
0
Amjad Javed to Dockrell, no run, backs away and looks to work it away through the leg side and it moves in a touch and hits him on the front pad

Down to three runs now, from seven balls. Ireland's to lose

48.5
4
Amjad Javed to Dockrell, FOUR runs, slower ball, and Dockrell has smashed that over extra cover. Wasn't a bad ball in theory, but he'd moved away from the line and was in the perfect position to swing his arms through that lofted drive
48.4
1
Amjad Javed to Cusack, 1 run, slower ball, full, outside off, smacked back down the ground and it ricochets into the cover region off the bowler's palm
48.3
2
Amjad Javed to Cusack, 2 runs, low full-toss outside off, and he swings at it and swipes it away through square leg. Tauqir kicks it away while sliding to field it, and ends up conceding a second

Number of Irish bowlers who have bowled their full-quota of overs for less than 30 runs in a WC game. Paul Stirling (2/27) is the fourth.

Number of times that Ireland and UAE have previously played each other in an ODI.