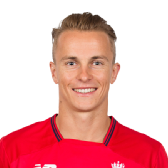 After posting a seemingly modest 7 for 174, the Sixers ripped through the Scorchers' top-order in favourable batting conditions with Jackson Bird capturing three early wickets in his return. The Scorchers capitulated for just 126 with only two recognised batsmen notching double-figures.

It was an impressive turnaround by the Sixers, who struggled to hit boundaries after being sent in to bat until Tom Curran came to the rescue with a 21-ball unbeaten 43 to change the momentum.

Chris Jordan continued to perform well with the ball in front of the home fans, who had little to cheer about once the Scorchers batted.

The Sixers ended a two-match losing streak with both their wins coming against the Scorchers, who have only one win from four games.

The Sixers' batting is reliant on hard-hitting opener Josh Philippe, who thrashed the Scorchers' attack in Sydney. He promptly smacked returning quick Matt Kelly through extra cover for an attractive early boundary but fell in the third over after an ungainly swipe against Jordan, who is quickly becoming a cult favourite for the Scorchers faithful.

The wicket exposed the Sixers' lack of firepower with a rusty James Vince struggling for timing against accurate bowling, as the visitors struck a middling 1 for 45 in the Powerplay.

Needing to make a move, Daniel Hughes targeted spinner Fawad Ahmed in the eighth over and smoked a slog sweep into the crowd. But he could not replicate that success against Ashton Agar, who smartly bowled shorter and wider to lure Hughes out of his crease for a stumping. Vince's painstaking 22 ended when he was stumped off Ahmed to leave the Sixers at a middling 3 for 75 after 10 overs.

Curran finishes with a bang

Agar and Ahmed bowled seven overs on the trot to stymie the Sixers, who were unable to counterattack the spin. Moises Henriques, wearing a cap, finally broke the shackles and clubbed three straight boundaries off Agar in the 13th over.

The now helmeted Henriques also took a liking to pace, smacking a pull shot to the boundary off Jhye Richardson as he raced to a whirlwind 35. But Richardson had the last laugh when a slower, wider delivery deceived Henriques who dragged onto his stumps.

With death bowling specialist Andrew Tye out injured, Jordan has helped soften the blow as he and Richardson bowled with precision to keep the Sixers frustrated.

The Sixers went four overs in the backend without a boundary, before extraordinary hitting in the final over from Curran lifted the total from 150 for to 174.

After their fireworks in Adelaide, anticipation was palpable when big hitters Liam Livingstone and Josh Inglis came to the crease. It was an anti-climax, however, with Livingstone falling in the second over off Bird, who tasted success with his first delivery of the BBL season.

Bird struck again in his next over when he bowled Cameron Bancroft, who unsuccessfully skipped down the track. The fast bowler had remarkable figures of 2 for 3 after two overs to put the Sixers firmly in control.

The Sixers' stranglehold tightened when an anxious Inglis hit straight to mid-on as the Scorchers crashed to 3 for 16 in the fifth over. Bird's party continued when he claimed Cameron Green caught behind down the legside although replays were inconclusive whether the ball struck the glove.

The Scorchers' hopes completely sank when skipper Mitchell Marsh chopped on to Sean Abbott to leave them teetering at 5 for 34 - a horror show reminiscent of their wooden spoon campaign last season.

Ashton Turner attempted to launch an audacious counterattack as he dented Bird's figures with some power hitting in the 10th over. However, he too fell, for 28, chasing a rank Abbott delivery to summarise Scorchers' pitiful batting performance.

The Scorchers managed to avoid their worst ever defeat in terms of runs but it was little solace for the former BBL powerhouse whose season is quickly slipping away.