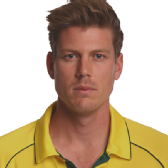 Two sixes from James Faulkner propelled the Melbourne Stars to a thrilling victory in the first Super Over of this Big Bash League season after a tense run chase ended with the scores level in regular play.

The Stars batted first in the Super Over and Faulkner struck Brett Lee's fourth and sixth balls for sixes to carry them to 19-0, which proved 10 too many for the Sydney Sixers as John Hastings picked up two wickets from his over.

Victory for the Stars had seemed almost certain when they required just 56 to win from 38 balls with eight wickets in hand, chasing the Sixers' total of 150 for 6. However, the dismissal of Kevin Pietersen for a superb 43-ball 54 in the 14th over shifted the momentum of the match and was the catalyst for panic within the Stars team.

With 12 balls remaining, the Sixers were now the favourites, with 28 still required. But the match swung one final time as a Tom Triffitt six helped take 12 from the penultimate over bowled by Doug Bollinger before one boundary from Faulkner, consecutive fours from Triffit and a scampered two in the final over bowled by Lee meant the scores finished level.

The Stars chase got off to the worst possible start when Luke Wright dragged his first ball, a back-of-a-length delivery from Lee, on to his stumps. A 70-run partnership between Cameron White and Pietersen then ensued. Pietersen, playing some vintage shots as well as displaying some evolution to his game with a deft and well-timed late cut, carried the Stars' pursuit of a crucial second victory of the season.

However, both fell in quick succession, bringing two new batsmen to the crease: one of them, Glenn Maxwell, horribly out of form, and the other, Triffit, an inexperienced player in the BBL.

All of the Sixers attack bowled well, with none of them conceding more than eight runs per over. However, Lee and Bollinger will be disappointed that the Stars managed to force a Super Over.

Hussey out of Stars campaign

David Hussey is set to be ruled out of the remainder of the BBL season after X-rays confirmed cracks in two metacarpals after he was struck on the hand by a ball from Andre Russell on Saturday. The Melbourne Stars batsman, who was replaced by Alexander Keath against the Sixers, said he had been advised to take six weeks' rest but is aiming to make a return in four.

The Sixers, who were put into bat by the Stars, had failed to capitalise on a strong start provided by Michael Lumb, registering just three boundaries in the second half of their innings - they scored 63 for 3 having been 83 for 3 after the first ten overs. Lumb, who scored 80, was one of only two Sixers players to reach double figures as some excellent Stars bowling and tentative batting stagnated the innings.

Lumb's innings displayed classical strokeplay and elegant timing but was strangely paced. He scored just one from his first eight deliveries and 31 from his final 29 sandwiching an aggressive middle phase of 48 scored off 24. Such a staccato tempo was most likely influenced by the rest of the Sixers batting order, which fell away gradually as the innings progressed.

Henriques' demise brought together Lumb and Jordan Silk, whose partnership of 69 was the primary reason for the Sixers salvaging something from their innings. However, with precious little batting depth below them and some brilliant bowling from the Stars in the middle overs the pair created no momentum.

It was the medium pace of Scott Boland, who took 2 for 19 and conceded no boundaries, and the left-arm spin of Michael Beer, whose four overs went for 24, that tied the Sixers in knots.

Lumb fell in the 17th over to Boland before Ryan Carters and Sean Abbott also went hitting out as the innings wound down. A six in the final over and four twos from Silk, who finished 37 not out, was not quite enough.