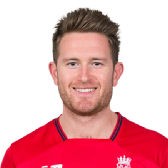 Mason Crane and Liam Dawson spun Glamorgan's middle-order into a stupor as Hampshire made it three Vitality Blast wins in a row.

Spin twins Crane and Dawson replicated their middle-over removal service for the second night in a row, having stunned Essex at Chelmsford, to claim figures of 3 for 20 and 3 for 11 respectively.

The pair were backed by South African overseas Chris Morris' 2 for 21 as Hampshire won by 41 runs - leaving Glamorgan winless at the bottom of the South Group.

Hampshire set Glamorgan 129 to win after James Vince had won the toss and decided to bat on a sun-kissed evening on the south coast. A lack of fluency had marred the host's innings due to a combination of a slow wicket and long boundaries - but the visitors failed to learn from the hosts.

Fakhar Zaman couldn't build on his 58 against Gloucestershire as Chris Wood, whose first two overs went for just two, had his caught at first slip to the third ball of the innings.

Colin Ingram was duped by the slow nature of the pitch as he threw his hands at Kyle Abbott, but only struck straight at short cover.

Like against Essex the previous night, Hampshire's twirlers teamed up to throttle their opposition and tear their batting apart after the powerplay.

Left-armer Dawson bowled Billy Root, who was attempting to scoop, and Chris Cooke in consecutive overs.

At the other end, legspinner Mason Crane tempted David Lloyd into a slog sweep, which was caught on the deep midwicket boundary, before Dan Douthwaite was stumped - leaving Glamorgan 63 for six.

Jeremy Lawlor and Merchant de Lange both picked out long-on off Chris Morris and Crane as the rate started to catch up with Glamorgan. Graham Wagg was yorked and Dawson bowled Lukas Carey - as Hampshire remained in the quarter-final hunt.

Earlier, Glamorgan used their inside knowledge of Aneurin Donald's game, having developed it until he joined Hampshire last winter, to have the Welshman smartly caught on the square leg boundary.

It took 22 balls until the first boundary, one of only eight in the innings, when Rilee Rossouw clubbed over midwicket.

Next ball he was bowled by de Lange to give the bowler his 100th T20 wicket in his 88th appearance, before Sam Northeast was stumped.

Vince followed his explosive 87 against Essex on Thursday with a 21-ball 25 but his frustrations showed with a top-edged hoick to long-on.

Morris, James Fuller and Dawson all found various boundary riders but a crucial late cameo from Lewis McManus, which included the sole maximum of the innings took Hampshire to what appeared a below-par 128 for 7. Ultimately, it proved to be more than enough.