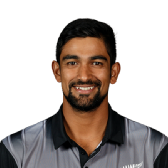 9.15 pm New Zealand have won the Chappell-Hadlee trophy 2-1. McCullum leads his team off for the final time in ODIs, as they walk off to shake the hands of the Australian players. There will be a lot of goodwill today because it is the end of McCullum's ODI career. All the New Zealand players hug each other as they walk off Seddon Park. No one is leaving the ground, this is a farewell and they want to stay as long as it lasts, the stands are packed.

New Zealand had underachieved by falling for 246, they looked so good for 300, but Australia's seamers bowled really well. Australia will feel they could have fielded far better though, there were a couple of dropped catches and plenty of fumbles in the field.

And then Australia were going really well in the chase until Bracewell and Sodhi came on and slowed things down. The double-wicket over from Sodhi - where he dismissed Smith and Maxwell - was perhaps the turning point, and then that freakish dismissal of Marsh.

Pual George: "Talk about a classic ODI! So satisfying to watch a team successfully defend <250 (in spite the umpiring controversy) and have the match go down to the wire! Great game, well played NZ and a very fitting farewell to one of the world's greatest modern batsman / captain! Thanks Geroge Binoy & Gopi for your coverage! "

Somanath: "A fitting farewell to one of the greatest sportsmen and an artistic cricketer Brendon 'Baz' McCullum. Thank you Sir. Respect!"

The DJ at the ground has "Celebrate good times, come on" playing. The teams are gathering for he presentation, stay with us for it.

Lee: "A truly magical finish for Baz. The perfect game for him to showcase exactly why he is so revered. His attacking mindset was on display in every facet of this game."

KaneBunce: "Great work, Black Caps! Winning the Chappell-Hadley with a good winning margin despite having to defend a low total in the modern game is the best way you could farewell your captain."

The Man of the Match is legspinner Ish Sodhi, for his timely wickets to bring New Zealand back into the game. He was playing a four-day game yesterday! "It was a weird turnaround, but I am happy to take the opportunity and seeing Baz off like that is something I am proud of. I love playing here, the wicket offers a bit of turn."

Steven Smith: "I think we have been outplayed and New Zealand deserve winning. A bit of controversy there, I don't think there was much of an appeal ... and they went upstairs after the replay, a bit disappointing. The right decision was made no doubt about that ... I don't want to take anything away from the Blackcaps, they deserved to win." The boos from the crowd when he said controversy turned to cheers as Smith said the right decision was made.

Brendon McCullum: "Of course I did [ kow that I was near 200 sixes]. Incredibly lucky to play for 14 years, meet some great blokes and make some great friends. I want to thank everyone for supporting me and making it possible. Tonight we were outstanding for 80% of the game, the way we bowled and fielded was testament to the character of the side. Sets up the Test series. It's great to play against the australians. They play hard and uncompromising cricket ... the way that Ish played, just shows how strong he us ... Doug has bowled well all year for us. the crowd has been outstanding ... I'll hold these memories for the rest of my life."

Thank you for the memories Baz, as he goes off to lift the Chappell-Hadlee Trophy and end his one-day international career. There are two Tests to go though before we farewell McCullum for good from international cricket.

Wood: "Well deserved win for NZ and Brendon. Good win to end his ODI career. One of the best games in recent times. Well done NZ."

Thank you for your emails today, it was an absolute pleasure to call the game. Thanks for reading. Cheers.

43.4
W
Milne to Boland, OUT, that's the game! A direct hit from point has run out Boland and the Kiwis rush towards Nicholls the fielder at point! Boland backed away towards leg to steer the ball towards point and ran, Nicholls moved quickly to his right, fielded cleanly and nailed the stumps with a swift throw, Boland was a couple of feet short

42.6
0
Anderson to Hazlewood, no run, short ball outside off, backs away and tries to cut but is beaten by the bounce
42.5
1
Anderson to Boland, 1 run, opens the face late to steer the ball past first slip to third man

No. of sixes for McCullum in ODIs. He got there with three sixes in this match, which is supposed to be his final ODI. He is the 4th batsman to hit 200 or more sixes.

No. of consecutive ODIs by NZ without getting all-out when batting first, before this in completed ODIs. Last such instances was also v Aus (2015 WC final)

No. of ODIs it took for Matt Henry to take 50 wickets, is the second-least by a NZ bowler and joint-fifth least overall. For NZ, McClenaghan had done it in 23 ODIs.

No. of bowlers who have better bowling strike rate than Matt Henry's 24.5, with a minimum of 50 ODI wickets. Only Mitchell Starc is marginally better with 24.2.