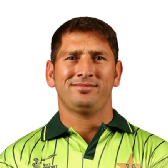 So that's a wrap with a day to spare. Might be filed away as evidence for those wishing to argue for four-day Tests, but that's a debate for another time. The report is all ready and waiting for you, quite impatiently, I might add. So trot on over and relive the scenes of a great day of Test cricket. Plenty more stories will be coming over the course of the day from Jarrod Kimber and Andrew Miller. Isn't it fun when we can just keep pushing a cricket match a littler further along? (So long as it isn't me doing the heavy lifting, of course) Anyway, from Alan Gardner, Andrew McGlashan, Al Muthu and Venkat Raghav, it's goodbye.

Yasir Shah is Man of the Match The crowd roar his name as he accepts his prize. Mushtaq Ahmed comes up to translate for him. "Thanks to mighty Allah. First Test match at Lord's and England, very happy with it. At the start it wasn't spinning much, so I was just concentrating on my action and line and length and that helps me get into rhythm. I was lucky to get lots of wickets in the first innings. I was concentrating more on my batting today. I wanted to get a fifty today, but I couldn't. I was very focussed though, even with the pressure. You always rely on a spinner on the fourth and fifth day and that puts pressure on us. Dedicating my performance to my team, whenever I was drifting, trying to bowl the magic ball, they told me to keep going, keep bowling maidens and that will get me wickets. I am using Inti [Intikhab Alam, team manager] and myself [Mushtaq] for their experience. We had a plan, bowling from one end in the first innings, and then another in the second innings. [Who is the better bowler?] I think Mushtaq"

"Of course, career is not 42 years, maybe 15 years. You could say its a top win as captain and Pakistan team, really proud of the team, how they fought and how they showed really good skills. Especially today, mentally they were strong and they should such patience. Yasir Shah bowled brilliantly for us," Misbah-ul-Haq says, "Remarkable turnaround after that 2010 incident, this team took responsibility. They showed respect to the game, playing all through the six years, bringing the team to No. 3. And winning this Test match against a top side in their conditions speaks volumes of our team. Everybody wants Amir to play, the crowd especially, the supporters. Everyone believes he is such a good cricketer, it's something special for him also, he is part of a team which has won a Test match here. It's a really memorable day for him and from here he can start his career again, he is a good kid now. If we can cross 300, we have a chance, especially in the first innings. We have a top spinner and the bowlers in the fourth innings, they can put so much pressure with reverse swing and making it really difficult for the opposition. Live by the sword, die by the sword. You have to back yourself, if someone invites you to play your favourite shot, you play it. The celebration was again for the same camp, we enjoyed that camp and it was again a message to those guys and we have been really working hard and I think they would have really enjoyed this celebration. I would like to dedicate this win to Abdul Sattar Edhi [a philanthropist and a social activist]. They supported good cricket, they enjoyed the cricket and we love playing cricket here."

6.30 pm Presentation time. "That 75 runs in the first innings, we left a few out there," Alastair Cook says. "The pitch was certainly better to bat on the first and second days. When you lose a game of cricket, and we were always slightly behind. I thought we were okay on the first day, and then on the second day to allow Yasir to take six wickets when the ball wasn't turning - he bowled beautifully - but that hurt us. Chris Woakes was outstanding, not many seamers take 11 wickets at Lord's. There's a bitter taste in the dressing room right now. Some of the shots [in the second innings was risky] But it's up to the individuals to change. I always thought we were two wickets behind than we wanted to be. It's really frustrating. we've lost before, we can bounce back. That's the wrong way to look at things, we have a side that was good enough to win, it's great to have Ben and Jimmy back, they seem to be back, but we have to digest this overnight and pick a squad for Old Trafford. Credit to Pakistan, but we're very confident we can beat them, but we have to get better"

6.10 pm The Pakistan team has arranged themselves in two rows. I think they are going to do push-ups again. Younis is making sure all of them are in line. And its the entire squad, even the substitutes. Five press-ups and then a jump and then a salute. They have laid a marker at Lord's, they have sounded a warning to England and indeed to the world. "Not just in the UAE," it reads. And nothing makes that fact more clear than Yasir Shah's performance in this Test - 10 wickets, five on a second day pitch with not a hint of turn too. Misbah-ul-Haq, batting for the first time in England, scored a century. Asad Shafiq, hailed as one of the most technically proficient among current batsman in Pakistan, proved his mettle at Lord's. Wahab's reverse swing. Amir's redemption...This has been a special Test for this team.

England gave them a good fight though, although you wonder if most of that came from one source. Chris Woakes can get into an international team as a specialist bowler, he took 11 wickets in this match. He can get into an international team as a specialist batsman, he faced more balls than any other English batsman in this match. He deserved to be in a winning team, but England suffered from lack of partnerships. They were beaten today, but this isn't their best XI, is it? Joe Root played a bit like he was batting Free Hits, not a pumped up Pakistan attack. That'll need to change. England will also hope James Vince and Gary Ballance harden as a result of this experience. Both men were put under immense pressure, not only by the stakes of this match either. They're young players still hungry to prove their credentials. And lest we forget, James Anderson, their best bowler, will be returning later. So will Ben Stokes, their talisman. This series - there's three more Tests left! - is only going to get better. So stick around.

MANEESH ROY: "It's nice to see an Asian team doing well at Lord's. Well played Misbah. The series is not over yet, English batsmen need to show some resilience in remaining test matches."

Sabyasachi Chow: "The last wicket was more than just a solitary wicket for Amir.. It was a stamp of authority on the batsman and also his cricketing career.. The celebration actually showed how much it meant for Amir, how much he has been waiting for this day... What a moment, jubilation all round.. Despair for England..."

umair sheikh: "i wish if i were at lords to watch paksitan team celebration heart touching tears in my eyes "

Ali Hasan: "Not to take away from your compliments for Woakes, Asad Shafiq in fact played more balls than him. Just trying to be statistically accurate." Thanks for the spot.

75.5
W
Mohammad Amir to Ball, OUT, there it is! And it is Amir! Six years after the worst day of his life at Lord's, he claims the final England wicket to fall that gives Pakistan a victory at this venue for the first time since 1996. It's full, it's straight, its quick and it cleans up the debutant Jake Ball. You can see the emotion in his eyes as he spreads his arms and takes off.

Barney: "That fingernail I was hanging on with? It just broke." Good on you for lasting this long. But this appears to be wrapped up. Will Amir be the one? Will he be able to take the wicket that wins it for Pakistan after what happened when he was here the last time

74.6
0
Yasir Shah to Finn, no run, flighted on off stump, defended
74.5
1
Yasir Shah to Ball, 1 run, that could have been it! Googly, aiming for middle and leg, Ball manages to keep it out and finds a single to mid-on

Runs by Pakistan openers in this innings; they have failed to total 50 runs in their last ten Test innings in England.

Number of batsmen who had got a duck and a hundred in their first Test at Lord's before Misbah-ul-Haq: Sid Barnes, Charlie Davis and Dilip Vengsarkar.

Younis Khan's strike rate in his innings of 25 - his second lowest in an innings in Tests when he has faced 50 or more balls.

First-class wickets for Chris Woakes. He got his 400th wicket when he dismissed Azhar Ali earlier in this innings.

No.of times England pacers have taken a ten-wicket haul at Lord's in the last 50 years including Woakes. Botham v NZ in 1978 and Broad v WI in 2012 are the others to do it

Last time before Woakes an England bowler took two five-fors in a Test at Lord's. Ian Botham took 6/101 and 5/39 against NZ on that occasion.

Cook's average in his last 15 fourth innings in Tests; he has only three fifties, with a highest of 63

Average opening stand in this Test, the fourth lowest in a Lord's Test since 2000; two of the four lowest have been in Tests involving Pakistan

James Vince's previous highest Test score in 5 innings; he had scored only 70 in those five innings, at an average of 14

Number of batsmen dismissed in the 40s in this Test, the joint 2nd highest in Test history. The highest is 8, Eng v Aus, Edgbaston, 1989

Wickets for Yasir Shah, his first 10-for in Tests; his previous best was 9 for 155

Pakistan's win-loss record v Eng in Tests at Lord's; only Australia, with a 15-7 record, have done better