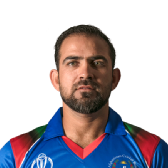 Time for the presentation:

Mushfiqur Rahim: We were outplayed in all three departments. We played well earlier in the first 30 overs but they did well thereafter, especially in the slog overs. They batted very well and didn't gave us any chance and we were one bowler short. 254 was chasable, we could have batted better but they bowled well too. Bowling was ok, but they batted really well in the end. Shakib and Tamim aren't there so there was a lot of pressure, I tried to bat well but I got out cheaply. Hard luck to the boys. It's hard to believe that we disappointed the fans but we'd want to improve in the remaining matches.

Mohammad Nabi: Our first win against a Full Member. They bowled very well till 25th over, and the last partnership was brilliant. It was a good partnership. Our boys bowled brilliantly in the first few overs and fielded well. We missed some catches towards the end…Fans and the whole country must be celebrating and inshallah we'll try to do even better in the coming matches. Our fans have always prayed for us and they love us so I'd like to thank them.

Samiullah Shenwari is the Man of the Match: It was a team effort…from the coach, manager and everyone. We wanted to bat till 50 overs and I did. 150 was the big partnership, our plan was to just stay at the wicket and when we took 107 runs from the last 10 overs, that was the main point. I have learnt legspin from the beginning and have been working hard with the coaches.

9.47pm That's a historic win for Afghanistan, their first ODI victory against a Test-playing nation and their 17th ODI win overall. They were in tatters at one point of time, at 90 for 5, but Shenwari and Stanikzai revived and charged them to 254. Shapoor Zadran and Hassan started very well when they bowled, with early wickets. But Mominul replied with some fireworks and was followed by Nasir's 41 before Ziaur's 22-ball 41, which gave Afghanistan a scare. But Nabi struck again and again and finished it off in the 48th over for the epic win. They will never forget this day, what a journey they have had. That's all we have for you from this historic win, it's Vishal Dikshit signing off for now, bye bye!

Hamid Hassan : Amazing win, thanks to god. Congratulations to all Afghanistan people around the world. First time we have beaten a Test-nation side. Everyone worked very hard and that's why we won. Feel very proud because we have been playing only for last 10 years and other teams have been playing for much longer, so very very happy. I pulled a muscle and was praying that we would win when I was sitting out.

47.5
W
Mohammad Nabi to Rubel Hossain, OUT, it's all over, Afghanistan have won, a landmark day for their cricket, the final wicket came after a swipe to midwicket, fielder gets under it and there's no fumbling this time

46.6
0
Shapoor Zadran to Sohag Gazi, no run, full toss outside off, he takes the injured hand off the bat and no time for a single as he jabs to point. Just one from the over

No. of wickets taken by Abdur Razzak in the first-ten overs, most by any spinner in ODIs since 2009

No. of ODIs out of 25 won by Bangladesh when they have the opposition down 5 wkts for 100 or less

No. of fifty partnership for the sixth wkt for Afg, including this one, now the second highest for the wkt

No. of time Afg have had their opposition down 2 wkts for one run or less before today

Nasir Hossain's scores when he was dropped by Stanikzai and by Shenwari. He was again dropped on 14 by Shenwari

No. of times Bangladesh have scored 180 or more off their last 30 overs in chase

No. of times Bangladesh have chased targets of 250 or more after being down three wkts for 70 or less