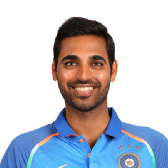 Having survived a banana peel against Hong Kong, India came back with a near-perfect bowling performance to register their most comfortable chase against arch-rivals Pakistan: with 126 balls remaining. Going through a patch of uninspiring performances, the bowlers returned with a thorough show, exposing Pakistan's hardly-used middle order, which showed its lack of experience of batting through 50-over innings by going for big shots every time they were tied down.

Bhuvneshwar Kumar returned to form after 35.2 wicketless overs in ODIs, and Kedar Jadhav's return to the side - that cushion of the sixth bowler - showed just what India missed in England. Between them, they took six wickets; Jadhav's 3 for 23 were his best figures in ODI cricket.

Both the slots - opening bowler and the pressure on Hardik Pandya in absence of a sixth bowler - had been matters of concern coming into this match. Bhuvneshwar came into the match with an average of 48.50 and a strike rate of 61 in the Powerplay overs since the start of 2017, third-worst numbers among those who have bowled 500 Powerplay balls or more in that period. Here, reunited with Jasprit Bumrah who missed the England ODIs with a broken thumb and was rested in the Asia Cup opener, Bhuvneshwar showed the worth of his experience.

In the first five overs, there was not a single loose ball bowled. The left-hand openers were cramped for room, and knowing there was no movement to be had, the bowlers didn't bowl a single drive-able ball. Imam-ul-Haq tried to break the shackles by giving Bhuvneshwar the charge, who shortened the length accordingly to draw an edge. Fakhar Zaman, who scored a sensational hundred in his last match against India, the Champions Trophy final, wasn't even given a ball he could pick a single off. Frustrated, he finally tried to pull but Bhuvneshwar managed to cramp him up, and forced the top edge to make it 3 for 2.

In two swift blows, Bhuvneshwar had taken out two big threats. One of the remaining batsmen, Shoaib Malik, had scored more runs and hit more boundaries than the rest of the XI put together. Captain Sarfraz Ahmed had been called upon to bat only ten times in their last 20 ODIs. Arguably their best all-round batsman, Babar Azam completed the middle-order core that was now left to bat a majority of the innings before the big-hitting allrounders could take over.

Azam and Malik began promisingly enough, adding 82 for the third wicket, but even in this partnership risks had to be taken. India didn't allow them easy rotation of the strike. When eventually Kuldeep Yadav went past Azam's outside edge with a lovely wrong'un, the game was opened up once again. It didn't matter that Malik was reprieved twice - once by MS Dhoni and then by Bhuvneshwar in the deep. It didn't matter that Hardik Pandya hurt himself so badly while bowling that he had to be stretchered off the field. Pakistan's middle order just crumbled under the pressure, with the next four wickets falling for just 25 runs.

Pandya's replacement, Jadhav, managed to frustrate the batsmen with his shrewd changes of pace and trajectory before Sarfraz tried to hit him for a six wide of long-on. This time, Pandya's replacement in the field kicked into action. Manish Pandey, no stranger to tough boundary catches, hared across to his right, took the catch, realised he was going to struggle to stay in the field of the play, lobbed the ball back in, stepped out and came back to take it, all the while making it look quite easy.

Malik made the next dismissal look easy. Asif Ali, the new batsman, refused to acknowledge Malik's call when the ball had gone to short third man, but Malik took an age to turn, and a long, circular route back, presumably to try to deny the fielder a clear sight of the stumps. In the end, the circuitous route and the lack of a dive or even a proper stretch resulted in his wicket.

Then, Jadhav first and the quicks later ran riot to not even let Pakistan bat their allotment of 50 overs. Once the target was that low - 163 - it was clear India weren't going to need their allotment themselves. Not with Shikhar Dhawan carrying on from the hundred against Hong Kong and Rohit Sharma timing everything sweetly. Rohit looked in absolute peach form, hitting three sixes during his 52 in an 86-run opening stand. The one disappointment for Rohit will be the return of his legspin troubles from the IPL: he fell to the first ball from Shadab Khan, a wrong'un.

Now was not the time for India to worry about those things. They had come out unharmed from a possible slippery start to their Asia Cup campaign, winning two ODIs in two nights and heading to the Super Four stage as the leaders of their group. Not that the position changed anything if you qualified: all teams play each other in the next stage and carry no bonus points from the first round.