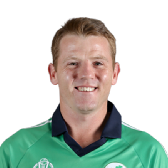 Long after the game ends, Ireland will celebrate and Bangladesh will question certain captaincy decisions made by Ash. Was he right in bringing in the seamers against Kevin ? Should he have continued with the spinners? But that's for later. In the here and now, let's celebrate the Ireland victory. What nerves. What chutzpah. And what joy. The dug out erupted when Kevin smashed that last ball. The crowd are dancing and singing. The tournament, which has already seen Netherlands beat England and Australia on the brink, watches another Associate country deliver the sucker punch. For Bangladesh, it's sad deja-vu. They experienced the same sinking feeling against this very team in World Cup.

They bowled with skill and lots of heart to restrict Bangladesh to 137. Mashrafee hit out in the end and started well with the ball to give hope to Bangladesh. Niall counterattacked. And later, his brother Kevin closed the lid on Bangladesh.

Ash has been very gracious in defeat.

Porterfield: The target didn't seem steep. The bowlers got to swing it up front and they did really well. They {O'Briens} batted really well to take the game away from Bangladeshis." He also thanks the crowd for coming in to support the team.

Man of the Match Niall -: "It's been a brilliant team performance. We have been watching the tournament for a few days now and itching to come in and do well. The conditions certainly favoured us. Everyone batted really well. The boys did well. The crowd have been brilliant again today. They follow us. We have belief in our selves. We will give a good game against India. "

That's it from us. Thanks for logging on. Soon, Australia will take on Sri Lanka in a big game. Log on for that.

18.2
4
Rubel Hossain to KJ O'Brien, FOUR runs, Irish eyes are smiling ... What a stunning knock from Kevin. He thrashed this one over mid-off for the match-winning boundary. Kevin and Niall with the bat have completed the job started by their bowlers
18.1
2
Rubel Hossain to KJ O'Brien, 2 runs, Another short delivery, Kevin stands tall to carve it high over cover point. The Irish in the crowd are singing now. Great scenes here

Join Cricinfo's UK editor Andrew Miller and associate editor Dileep Premachandran as they discuss the World Twenty20 here. Send your questions for them in to chatterbox@cricinfo.com.

Sabbir: "Why Rubel?! As Shakib and Naeem, both have 2 overs in their hand...ashraful is going to hand over the match to Ireland..Strange Captaincy"