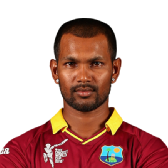 12:12 am Thanks for joining us today. We'll be back for the next one. Have a good night.

Gayle says he was looking to defend 140 and everything they got above that was a bonus. The momentum did it for Trinbago, he says. Bravo's sign-off is an ode - to the fans, the bowlers and the ones who stepped up.

The captains' interview has spontaneously turned into a DJ Bravo performance of 'Champions' with Danny Morrison and Chris Gayle all joining in.

Man of the Match, Denesh Ramdin: Was important to be calm. Myself and Dwayne had a plan but it didn't come off. In the last couple of games, I didn't contribute much. The crowd has been amazing and I hope they continue to support for us. First time I have done it for them and I'm delighted.

11:51 pm What an innings from Denesh Ramdin. Huffed and puffed through the middle overs when the spinners came on. The screws were on so tight, the Knight Riders had no business being anywhere close to victory. But Ramdin has endured, and he found company in Searles to lift them into the playoffs. The Patriots have let this one slip. Dropped some catches, and brought their frontline spinners on too late. Haphazard tactics, with the best bowlers not bowling through - Nabi and Badree took four wickets between them in five overs, including one maiden from the Afghan. Neither of them bowled out their full quota. And it all came undone in the last 20 balls or so, with length balls and a full tosses, an two short ones that went for six.

19.3
4
Hasan Ali to Ramdin, FOUR runs, he's done it! One bounce, into the straight boundary. A full toss at middle stump, lifted over the umpire and he's wheeling off in celebration before that's even reached the boundary
19.2
1
Hasan Ali to Scantlebury-Searles, 1 run, full outside off, glorious cover drive timed to perfection, straight to sweeper
19.1
0
Hasan Ali to Scantlebury-Searles, no run, slower short ball outside off, lulls Searles to go through the pull early. He misses it, it lands on the bounce in front of the keeper

Ali has to defend 3.

18.6
6
Brathwaite to Ramdin, SIX runs, fifty for Ramdin! A match-winning knock, surely? Woeful bowling. Full toss on leg stump. Get away from me, he says to the front foot, and drills this over the midwicket boundary

Fewer than 10 to get