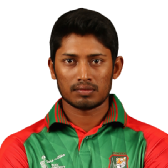 Dhaka Gladiators achieved their maiden BPL victory, and it was a relatively easy one against Sylhet Royals, with seven wickets and ten balls to spare in Mirpur.

The Gladiators, led by their captain Mashrafe Mortaza who took 2 for 22, dismissed the Royals for only 124 after losing the toss. A few Royals batsmen got starts but no one was able to convert them into anything match-winning; Naeem Islam's 30 off 24 balls was their best performance. The Gladiators used as many as seven bowlers, with only Mortaza and Naved-ul-Hasan completing their full quota of four overs.

The Royals removed Ahzar Mahmood, who opened the chase, for 9 but were unable to get a second wicket quickly. Imran Nazir and Anamul Haque added 46 for the second wicket, and Haque added 43 more for the third wicket with Mohammad Ashraful. Haque top scored with 48 off 39 balls but was dismissed in the 15th over, with the Gladiators 18 runs from victory. Mohammad Ashraful completed the chase, ending the game with a six.