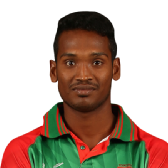 Al-Amin Hossain took 6 for 16 as Abahani Limited rolled over Cricket Coaching School for a paltry 35 to record a 212-run win in the Dhaka Premier League.

CCS now hold the second-lowest List A score in Bangladesh's domestic history after Chittagong Division were all out for 30 runs, more than a decade ago. This was also the second-biggest victory margin in the country, after Bangladesh's 233-run loss to Pakistan in the 2000 Asia Cup in Dhaka.

Al-Amin, a 23-year-old pace bowler, was in the forefront of all the carnage as he picked up all of the top five batsman inside the first 11 overs. Left-arm spinner Nabil Samad finished things off, picking up four wickets for only four runs in his 6.2 overs.

Earlier, Abahani were all out for 247 in 49.4 overs with the help of a half-century from Sri Lankan veteran Indika de Saram. Opener Nazimuddin chipped in with 41 while Mosaddek Hossain struck 39. CCS did have something to celebrate however as left-arm spinner Bishawnath Halder took 5 for 38.

After winning the toss, Mohammedan put up 307 for 8, despite an ordinary start from Tillakaratne Dilshan, who had plodded to 25 off 34 balls, and Upul Tharanga falling early.

Nabi led the recovery, adding 76 runs for the fifth wicket with Shamsur Rahman, before launching into the bowling attack. He reached his fifty off 49 balls, and took only a further 27 balls to convert it into a century. He blasted six sixes off his last 14 balls to go with three previous hits out of the park and 13 boundaries. Wicketkeeper Dhiman Ghosh gave good company as the sixth-wicket partnership amounted to 129 runs.

In reply, Doleshwar recovered from an early loss with Mehedy Maruf and Tillekaratne Sampath adding 112 for the second wicket. Sampath made 68 but once the partnership broke, Mohammedan's strong bowling line-up took over. Murad Khan and Dilshan took three wickets each while captain Mashrafe Mortaza picked up two wickets.

Chasing 263, Kalabagan looked comfortable until the final 10 overs. Chamara Kapugedera, having made 46 off 31 balls, was bowled by Elias Sunny. Naeem Islam, standing in as captain for the injured Shakib Al Hasan, kept the score ticking over with a sedate half-century but the other end became a source of regular wickets as Dhanmondi's experienced bowling line-up held sway. Shafiul Islam took three wickets while Sunny and Dilshan Munaweera picked up two each.

Junaid Siddique's 95 former the basis of Dhanmondi's total, with the captain Mushfiqur Rahim chipping in with 43. The duo put on 90 for the third wicket to set up a strong target. Kalabagan's other Sri Lankan recruit Jehan Mubarak took five wickets, his third five-for in List A cricket.