After suffering big-margin defeats in the Tests and ODIs in South Africa, the Bangladesh team has a lot to put right on and off the field in the next 12 months. Leading that process should be four of their most experienced cricketers and a coach who is considered the most successful in Bangladesh's history. Here's a close look at what each has to do to bring the team back onto the winning track.

Chandika Hathurusingha
He is arguably the most powerful person in the Bangladesh dressing room, having guided the team through their purple patch from 2015 to mid-2017. Hathurusingha has been credited for backing the likes of Soumya Sarkar, Sabbir Rahman and Mustafizur Rahman when others in BCB's power structure were skeptical. In their rookie year, the players performed impressively well, but are now faced with their first dip in international cricket.

Soumya burst onto the scene in 2015, but since then has done little of note except a few fifties that he hit in Tests earlier this year. Yet he continues to enjoy the support of the team management despite battling with technical flaws to deliveries away from his body.

Hathurusingha also expanded Sabbir from a utility T20 player to an ODI regular and then a Test player. He has, however, failed to achieve consistency despite being given different spots in the batting order.

Mustafizur, too, has been erratic. Although he can't be expected to maintain the high notes of his debut season, he has struggled with his rhythm since his shoulder surgery last year. He showed some flashes of his skill during the South Africa Tests, but it was hardly match-winning material.

BCB chief Nazmul Hassan has been Hathurusingha's biggest backer for the past three years, including granting his wish of becoming a selector. Whether this change in selection policy has worked is now open to debate.

Two factors work in Hathurusingha's favour for now. First, Mosaddek Hossain's eye infection deprived Bangladesh of a player in good form. Second, if the batsmen are not executing the coach's instructions out in the middle, there's very little the coach himself can do other than repeat his words every day.

It hasn't helped that Hathurusingha - or the other coaches - has been conspicuously and unusually absent from the spotlight in explaining the team's performances in South Africa. But he will now be expected to turn things around for these younger batsmen, particularly Soumya and Sabbir who have been Hathurusingha's projects over the last three years. How he turns things around after his first major setback will be intriguing to watch. 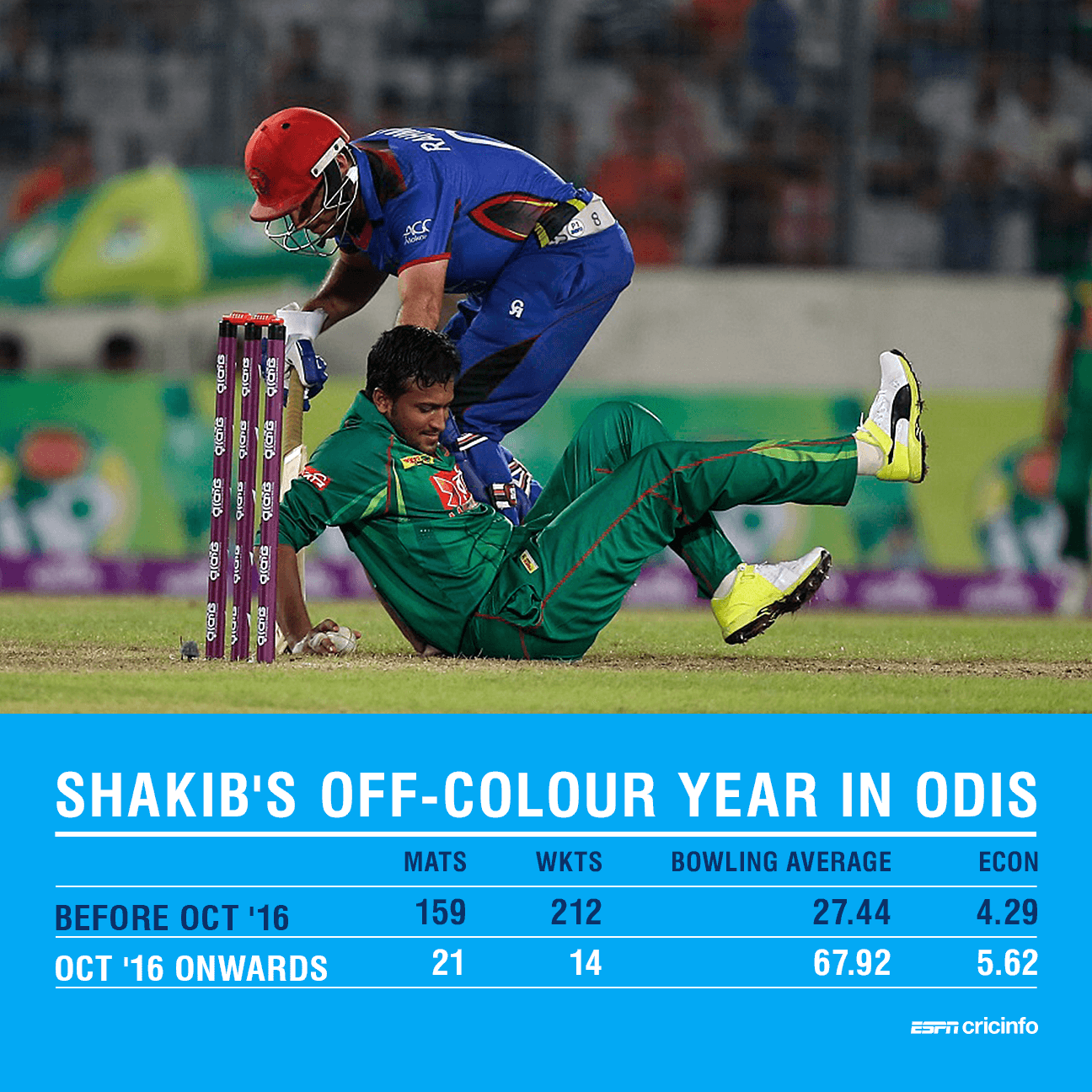 Shakib Al Hasan
It is now unlikely that the BCB will grant Shakib any more days off in any format until the 2019 World Cup. The drubbing Bangladesh received in the two Tests in South Africa proved that the inexperienced bowling attack badly needs him to tie one end down.

Shakib's batting was also missed in the Tests; as he showed in the ODI series, his counterattacking style is a factor that comes in handy in any format. The timing of Shakib's break from Tests wasn't great as he had just had a superb series against Australia at home.

His bowling in the ODI series wasn't great: he took only two wickets, giving away 164 runs in the three matches. In fact, Shakib's ODI bowling since the Afghanistan series last year hasn't been great. This year has been his worst as an ODI bowler, considering he has snaffled only six wickets in 14 matches at an average of 99.

In the coming 12 months, Shakib - who, till the South Africa tour, had had a fine year in Test cricket but not so in ODIs - has to clearly outline what he wants out of international cricket, particularly because he is one of the candidates for the Test captaincy. If he doesn't think there's a future for him in the longer format, BCB has to plan accordingly and find someone else for the job. However, if he does indeed envisage himself in the team's long-term Test plans, he could be leading Bangladesh across formats in the next two years. 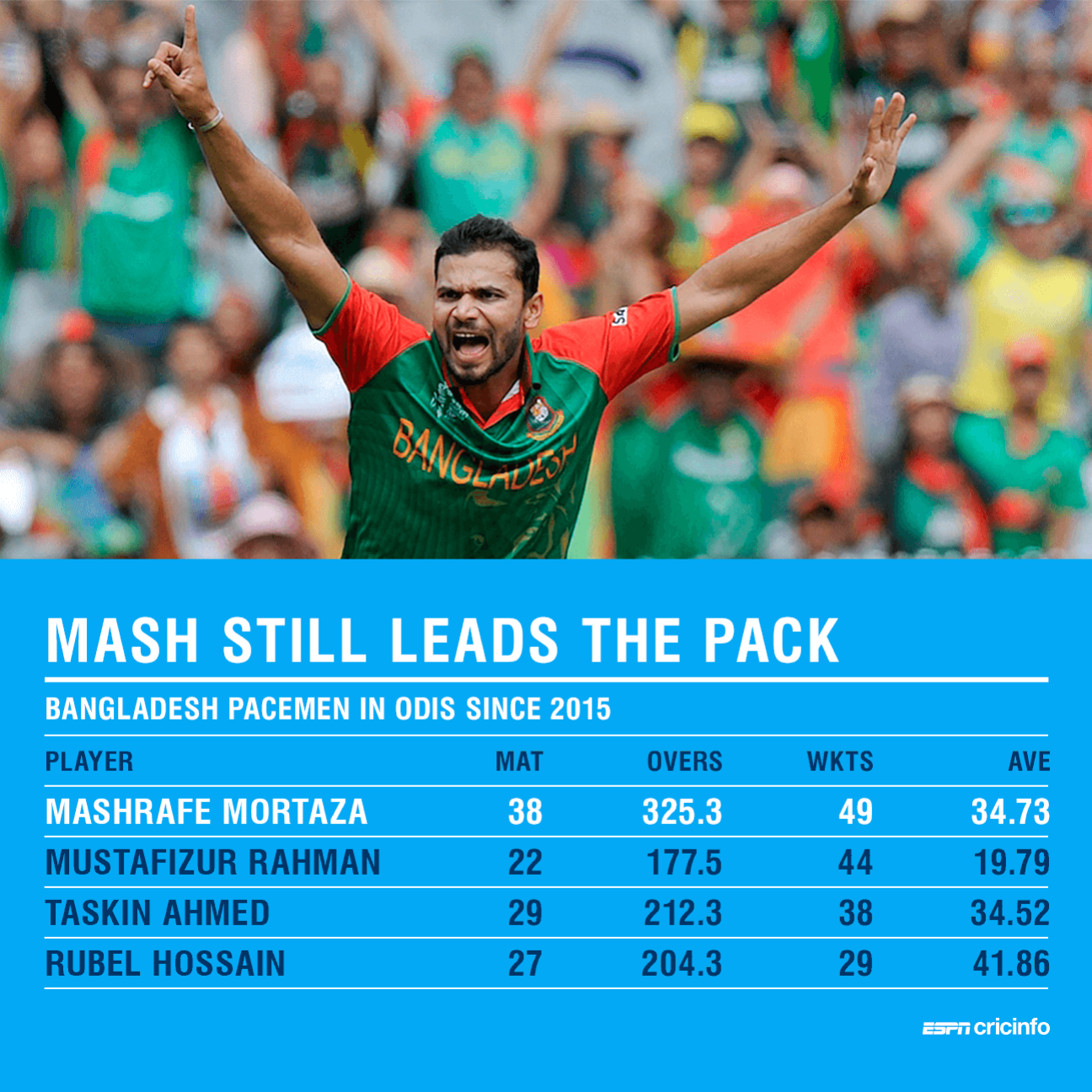 Mashrafe Mortaza
Whenever things have gone wrong, especially over the last two years, Bangladesh has banked on Mashrafe Mortaza. As the ODI captain, he has led them through the 2015 successes and the steady development until the 2017 Champions Trophy. Since 2015, he has been the team's highest wicket-taker in ODIs.

There have been occasions when he has finished games with his big-hitting. Add to that his position as the leading statesman of Bangladesh cricket; remember when he appealed to the England cricketers to make themselves available to play in Bangladesh in the aftermath of the country's worst terrorist attack last year?

For someone who remains so much invested in his game, going wicketless in the ODI series against South Africa will hurt. He has already admitted it was a tough series, and he was also slightly unlucky in Paarl. The measly returns notwithstanding, the majority of Bangladesh's fans trusts him as someone who can bring himself and the ODI team back from the dead.

Will the BCB and the team management continue to trust him as the ODI captain? There was significant pressure on him even after he led Bangladesh to the semi-final of the Champions Trophy, finally settling down when BCB president Nazmul Hassan publicly confirmed his captaincy till the 2019 World Cup.

Given his track record, one wicketless series shouldn't invite questions on his place in the side. In fact, it should be quite the opposite - only Mashrafe has faced up to the heat on behalf of his team in South Africa. And only Mashrafe can rouse this team again.

Mushfiqur Rahim
While his place in the Bangladesh side as a batsman is without debate, two responsibilities are no longer suited to Mushfiqur Rahim: captaincy and wicketkeeping in Tests.

Whether he continues as Test captain against Sri Lanka in January next year will be entirely up to the new BCB committee. Given how Nazmul Hassan has criticised Mushfiqur for his outbursts during the Tests in South Africa, Mushfiqur's captaincy is now on fragile ground.

He can be given a break from wicketkeeping if Liton Das takes his resurgence as a gloveman seriously. He hasn't had the best of times as a Test batsman but seems to be up to the mark as a wicketkeeper. Mushfiqur's comeback from the woeful Test series should be a great example for a relative novice like Liton: with so much going on around him, Mushfiqur responded with an unbeaten century and half-century in the first two ODIs.

He is the type of cricketer who thrives on responding to criticism. It would be wise to let him focus solely on his batting in all three formats over the next 12-18 months.

Tamim Iqbal
A fully fit Tamim Iqbal would have been a handful for South Africa but, instead, he was recovering from a thigh injury that he sustained on the first day of the practice match in Benoni. He then got injured during the first Test as well as after the second ODI, which effectively ended his tour.

With the form he has been in, Tamim will need to be handled carefully by the BCB and the team management. Currently, there isn't an opening batsman who can be relied upon with surety to replace or even partner him. Since 2015, his sincerity towards fitness and improvement in batting has been as good an example as Mushfiqur's progress as a batsman.

Tamim's priority in the next two years would be to sustain this batting form, and continue to be the stabilising factor in Bangladesh's top order. He is also among the Test captaincy candidates, and the BCB will have to tread that line carefully in order to not disrupt his batting form.