Sydney is the beating heart of cricket in Australia. The city has one of the strongest club systems on earth and has produced the lion's share of the Australian side over the years, including some of the world's greats. Sydney hosts a proud cricketing culture and, for the visitor, the game offers a number of ways to explore this magnificent city beyond its more regulation tourist activities.

The Sydney Cricket Ground is a good destination, even on a rest day, but many of the game's delights are to be found at lower stations of play. Weekends see a flush of park cricket, from the highest-level grade competition to lower shires or league games, much of it great to watch. Some of the grounds are set in gorgeous surrounds and attended by a curious collection of Australian characters. It all makes club cricket a marvellous excursion from the World Cup.

Visiting the SCG
The SCG is not only the best ground in Australia at which to watch international cricket but an institution that can be explored on non-match days. Combined tours around the Sydney Football and Cricket Grounds are offered on weekdays and Saturday mornings, as part of which one is taken through the player facilities, onto the field and into the more rarefied areas restricted to Members.

While it's fascinating to see the dressing rooms (and their surprising austerity), it is the ground's traditions that are most impressive. Statues of Sydney's great cricketers - Fred Spofforth, Stan McCabe, Richie Benaud and Steve Waugh - line the oval, while the Members' reserve symbolises the ground's rich past with wood-panelled bars, antique furniture and ornate stands. The tour concludes underneath the Ladies' Pavilion in the SCG Museum (accessible only to Members on match day), which contains bats, baggy greens, pictures and other memorabilia. 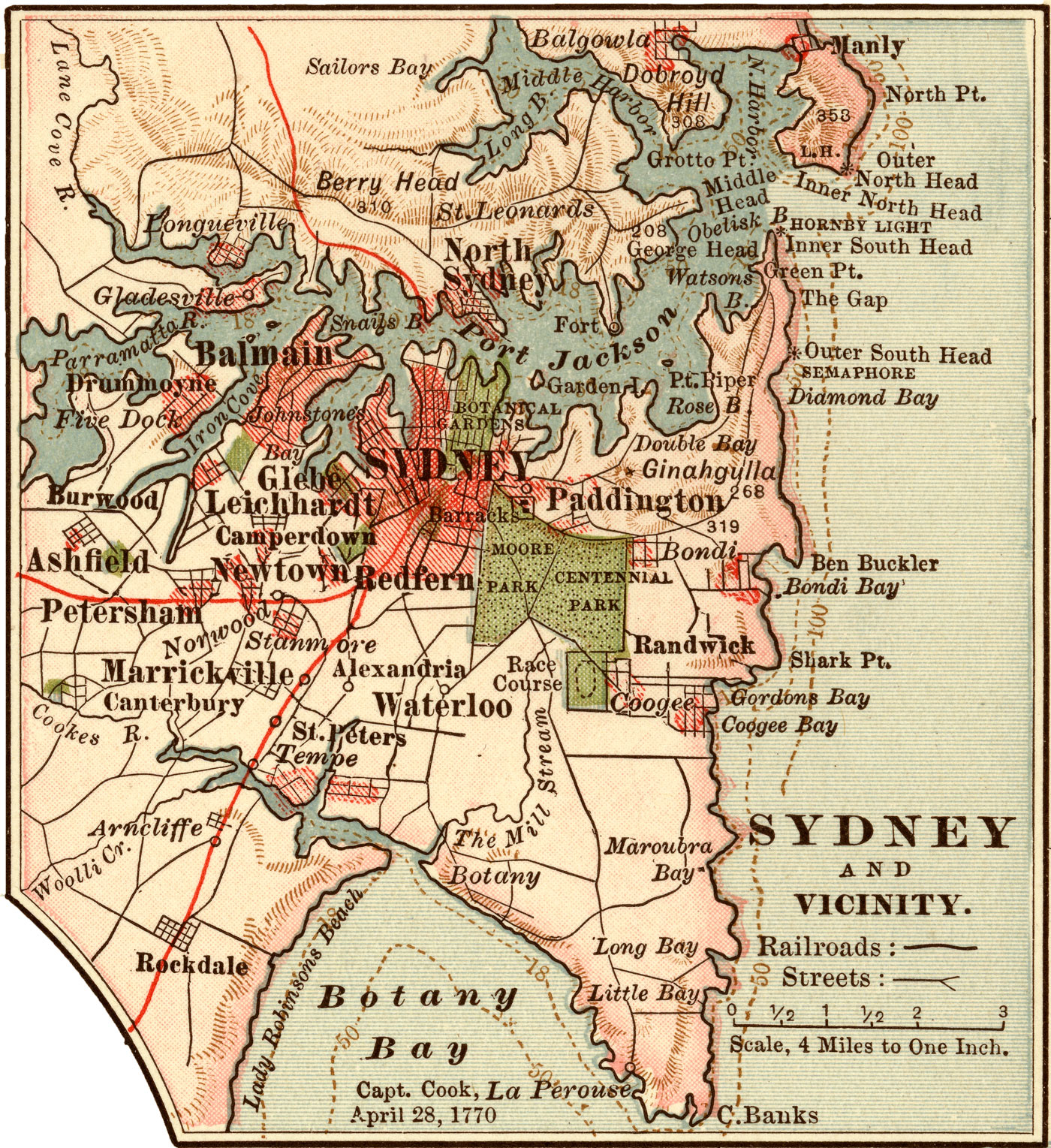 The SCG/Centennial Park: With no train, it's a bit of a bother to get to the SCG. However, there are a plethora of buses from the various city railway stations to the ground. On match days, the special No. 1 Moore Park express shuttle from Central Station is the most direct route. Alternatively, a cab may prove the best conveyance; fares are around A$20 from the city.

From the SCG, Centennial Park is a 15-minute walk leading through the film and television studios of Sydney's entertainment quarter. This is a fairly sterile neighbourhood but there are sports bars and restaurants along the way, and on Wednesdays and Saturdays, a Farmer's Market with fresh produce and food stalls. To return to the city, head back to the SCG and board one of the buses frequently running down Anzac Parade.

North Sydney Oval: It's a quick train ride on the North Shore line or an exhilarating walk over the Harbour Bridge to North Sydney Station. From the station, North Sydney Oval is a 15-minute walk up Miller Street with a number of buses also plying the route.

To return to the city, take a bus from out the front of the oval on Miller Street. There are frequent services but check the destination with the driver before boarding (it will also be displayed on the front of the bus)

Manly Oval: The Manly ferry leaves from Circular Quay every 30 minutes. The magnificent sail through Sydney Harbour takes half an hour. Tickets are labelled MyFerry 2 and can be purchased at the wharf. From Manly Wharf it's a five-minute walk up Belgrave Street to the oval. Stop at the Visitor's Information Centre for a map.

After a match, with buses crammed full, it's quite nice to walk from the SCG to the city down the steep backstreets of Surry Hills. This is a time-honoured path, with plenty of wonderfully grungy pubs along the way, like The Bat and Ball, The Cricketers' Arms and The Forresters.

Centennial Parklands
The SCG sits near the sweeping belt of the Centennial Parklands, a green swathe of ovals set across Sydney's south-eastern suburbs. This is a wonderful spot to see the whimsical world of Australian amateur cricket with an extensive set of pitches (including turf wickets) and, on the weekend, countless games in progress. These range from terse shires matches, with players all in whites, to motley affairs where an amiable visitor may be able to talk himself into a side.

The grand Centennial Park offers facilities to hire a bike or even a horse to navigate its gardens, ornamental ponds and magnificent vegetation.

Aside from the opportunity to watch cricket, it makes a marvellous spot for a picnic or a nap underneath a shaded tree. The adjacent Moore Park (just across from the SCG) and Queens Park (over from Centennial Park in Waverley) are less scenic but abound with cricket pitches and assorted games. There is a caf and kiosk overlooking the cricket fields, where you can try the time-honoured Australian fare of a meat pie with tomato sauce.

North Sydney Oval
North Sydney Oval is the most charming of Sydney's suburban cricket grounds. Lying over the harbour bridge within the affluent Lower North Shore, it is a picture of gentility with green tin-roofed pavilions, red wooden benches, a boundary picket fence and inviting grass banks. The Moreton Bay fig trees, and the palms in neighbouring St Leonard's Park, enhance this graceful ground's topical allure.

North Sydney Oval's small boundary and sound wicket make for fast, exciting cricket. Through the day, there is the merry din of clubbed sixes battering the canopies. For a visitor desiring a relaxed day watching good cricket, an afternoon at the ground is one well spent. A laze on the hill, trip to the barbeque, and a saunter about the oval (with a gander at its various characters) is a fantastic expedition into Sydney grade cricket.

Predominantly a business district, North Sydney is fairly quiet, but the adjoining neighbourhood of Crows Nest abounds with restaurants and bars. The ramen at Ryo's Noodles, a five-minute walk from the oval to Falcon Street, is outstanding.

Manly Oval
The coastal neighbourhood of Manly is a stunning outing from Sydney. The voyage on the Manly Ferry alone is extraordinary, leaving from the city's Circular Quay on a superb route past the Harbour Bridge and Opera House through the breadth of Port Jackson to Manly Peninsula. Here, just up from the wharf, sits Manly Oval, an elegant cricket ground bordered by pines and braced by the sea air. It is a proud and historic club (which has numbered Keith Miller among its players), there's always a good game on the weekend, and it's a great spot to drop by for a beer. What makes this chance to watch cricket in beautiful surrounds unique, though, is the natural wonder of the surrounding area.

A short walk from the oval lies Manly Beach, a long and golden stretch of sand that sinks into the Pacific. On a summer's day, it is a fine sight with sunbathers, paddlers, surfers, and a horizon of endless ocean. At the southern stretch is Shelley Beach, a sheltered cove famous for snorkelling. Milling about the waters are Wobbegong sharks (no threat to humans), otherworldly blue gropers, and teeming schools of various fish. Above the beach is a craggy headland which you can climb for staggering views across the harbour and across to the sheer cliffs that mark its southern entrance. If one is fortunate enough to combine this with a couple of hours watching play at the cricket ground, it may prove the abiding memory of an Australian trip.

Within Manly there is a profusion of bars, caf s and restaurants throughout the central mall and by the waterfront. Manly's pubs were once rough drinking dens - with the Hotel Steyne along the waterfront particularly infamous - but are now presentably redeveloped (and somewhat devoid of character). Fish and chips along with an ice cream from the beachside boardwalk, is a perennial favourite.