New Zealand's recent collapse on the first morning of the Cape Town Test, when they were bowled out for 45 in 19.2 overs, was the lowest Test total for more than 40 years, no mean feat when some of the dire performances of the newer Test countries are considered. But it was still streets ahead of the record Test total of 26, by another New Zealand team 59 years ago.

Until fairly recently England tours to New Zealand were always at the tail-end of Ashes series, inevitably giving the series an after-the-Lord-Mayor's-show feeling. The England players took them seriously but they lacked the intensity of matches against Australia, and it was not uncommon for senior players to miss them altogether and return home early to recharge batteries for the English summer.

The 1954-55 Ashes was one of the hardest, with England triumphing in Australia for the first time since the infamous Bodyline series 22 years earlier. By the time the England squad headed to New Zealand they had been away from home for more than five months (it was the last time the trip was made by ship) and with the main objective achieved, the final leg of the tour was seen as being a less onerous finale.

New Zealand, still waiting for their first win 24 years and 31 matches after obtaining Test status, were not thought to have either the batting or bowling to cause any trouble and had just returned home after a 2-0 series loss in South Africa.

The slow pitches in New Zealand were a complete contrast to those in Australia and made scoring difficult even for the better batsmen. England won the first Test in Dunedin by eight wickets but the large crowds who turned up could hardly be said to have been entertained. The run rate was around two an over and England fast bowler Frank Tyson was left pondering: "Can it be the grim game played here is the same we played at the beautiful Adelaide Oval? This is hardly thrilling fare." New Zealand were bowled out for 125 and 132, and although the England batsmen also laboured and two days were washed out, it was still an easy win for the tourists.

A match against Wellington between the two Tests followed a similar pattern - dour backs-against-the-wall batting and an easy win for the Englishmen. From there the tourists headed north to Auckland for the final game of their odyssey, the second Test.

A capacity crowd of 20,000 packed in for the first day and were rewarded with sunshine and some dogged defiance from the home side who closed on 199 for 8.

About 10,000 turned up for the start of the second day, many dissuaded by much colder weather and heavy early-morning rain. Those who stayed at home did not miss too much. New Zealand's tail folded quickly and then, in between the showers, England made sedate progress on a pitch where scoring was getting harder with each passing hour.

Despite this, by tea the ground was again full, and when the two captains - Geoff Rabone and Len Hutton - disagreed about whether play could resume after another heavy shower, the spectators, by then basking in watery sunshine, loudly booed the prevarication. When play did resume they booed the batsmen in what Tyson claimed was an attempt to put them off. It was about the only entertainment they got, as play was called off within minutes of the restart.

Some other Test lows 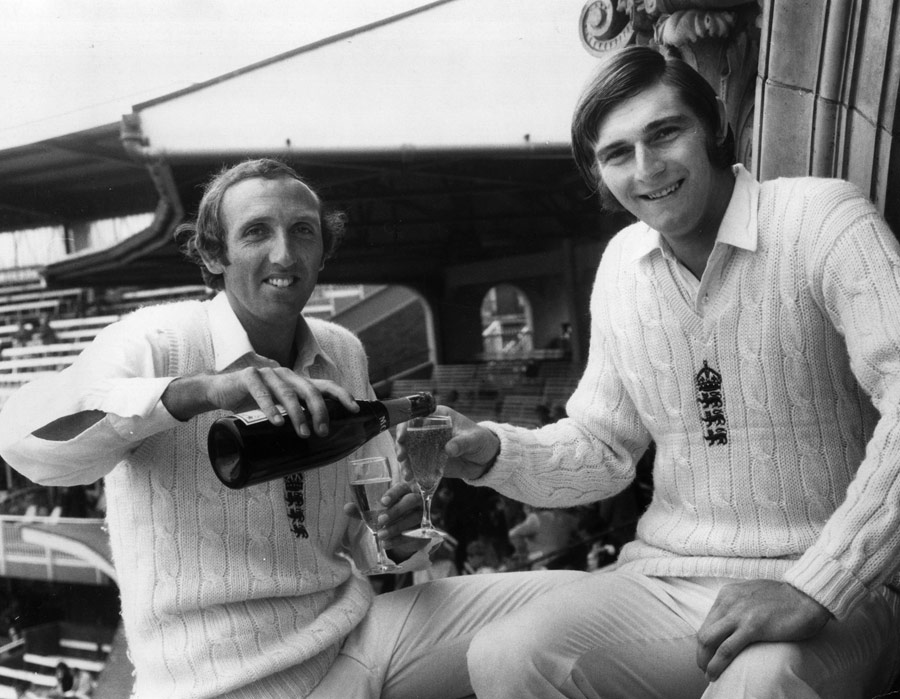 South Africa 30 v England, 1895-96 George Lohmann took 8 for 7 - and 15 wickets in the match - finishing things off with a hat-trick
South Africa 30 v England, 1924Fast bowler Arthur Gilligan took 6 for 7 in an innings that lasted 45 minutes and 12.3 overs
Australia 36 v England, 1902 On a wet wicket and in bad light Australia were bowled out in 90 minutes but rain helped them escape with a draw
India 42 v England, 1974 Skittled in a session under leaden skies by seamers Chris Old and Geoff Arnold
England 46 v West Indies 1993-94 Set 194 to level the series, England instead only avoided their lowest-ever total by one run as Curtly Ambrose took 6 for 24
West Indies 47 v England, 2004 Fast bowler Steve Harmison took 7 for 12 as England polished things off without a fielder in front of the bat
Zimbabwe 54 v South Africa, 2004-05 Ravaged by the politics of their board, Zimbabwe were skittled five overs into the first afternoon and lost inside two days. Wisden lamented it was "the most one-sided Test of all"

The match resumed after a rest day and England added 98 runs to their overnight 148 for 4, only eking out a lead thanks to some late-order defiance from Tyson and Brian Statham. When Tyson had walked out to bat at 164 for 7 he was met by Hutton, who said: "Stick around for a while, Frank, we may not have to bat again." What seemed no more than a throwaway remark turned out to be remarkably prescient.

At exactly 3pm New Zealand started their second innings 46 runs in arrears, and in the 40 minutes before tea they lost three wickets. Although the 12,000 spectators basked in sun, the pitch itself had deteriorated further and the ball came through at varying heights and took spin.

When the final session started, Hutton surprised even his own players by removing his strike bowlers - Statham and Tyson - from the attack and introducing the spin of Johnny Wardle. The ploy worked, as the classy Bert Sutcliffe immediately hit around a chinaman and was comprehensively bowled.

At the other end Bob Appleyard proved just as successful. For the second time in the match he took two wickets in as many deliveries, and for the second time he was denied a hat-trick by tailender Alex Moir, an inside edge falling inches short of a diving Tom Graveney in the leg trap.

Within 40 minutes of the resumption New Zealand were 22 for 8, and despite Appleyard's success, Hutton brought back Tyson and Statham for the last rites.

"There can't have been many bowlers in the game's history who've been taken off after taking 4 for 7," Appleyard recalled in 2011. "It was the last match of a long tour in which we'd retained the Ashes in Australia and then gone on to New Zealand, and Len wanted his main bowlers to finish off the New Zealanders. So I was denied the chance to get my fifth wicket, but I didn't mind at all because the likes of Wardle and myself were only the supporting cast to Frank and Brian.

"It was a really nice gesture on Len's part to bring them back to finish the innings after the wonderful tour we'd all enjoyed."

The end came quickly in one over from Statham. First he got Rabone leg-before, and with the final delivery of the eight-ball over he sent Johnny Hayes' middle stump flying. New Zealand had been skilled for 26, eclipsing South Africa's 30 against England in 1924, and their own previous lows of 42 and 54 against Australia in Wellington in March 1946. The innings had lasted one hour 40 minutes and 27 overs, and England had won by an innings and 20 runs.

"It was one of those collapses that suddenly happens," Appleyard told the Yorkshire Post. "Everything just went for us and the edges went to hand. New Zealand had two very good players in John Reid and Sutcliffe, but not too many others who were in that class. We didn't know it was a record at the time, but it's one that has managed to survive all these years."

"There were the usual celebrations after the game," Tyson recalled. "But they were rather muted in recognition of the lesser status of the New Zealand series."