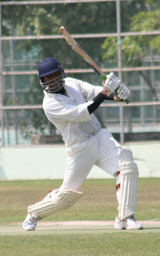 The win was set up by a first-innings century from Mahmood Riyaz, which allowed Hinnavaru to declare at 228 for 6 before Nexus themselves declared at 81 for 9 to avoid giving Hinnavaru a bonus point.

Nexus were then asked to follow on but were all out for 103. Mahafooz Mohamed, who was the destroyer in the first innings with 4 for 30, followed it up with 3 for 33.

The Cyprea Cup is the main tournament on the Maldive Islands' cricket calendar and features the country's best players as well as professionals from Sri Lanka who are flown in for the event.

Players whose teams didn't qualify for the tournament can play for one of the four teams. Four teams, the winner and runners-up from the previous year's Cyprea Cup and the top two teams from the limited-overs tournament play two-day qualifying matches before a three-day final.

Most cricket activity in the Maldives centres on the capital, Male, although it is also played in the southern most island, Addu Atoll. Offu beat MS Helping Hand in the first game of the tournament on October 17-18. There are six qualifying matches in total before the three-day long final is played from December 4-6.