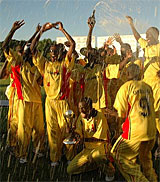 As expected, Uganda won the World Cricket League Division Three final, beating Argentina by 91 runs in Darwin. But Argentina, who only qualified for the tournament after USA were expelled last month, came close to pulling off what would have been a remarkable upset.

At one stage Uganda, the hot favourites, had slumped to 79 for 7, after being asked to bat, with Argentina captain Esteban MacDermott, who was later adjudged player of the tournament, taking three wickets. However Frank Nsubuga, who made 55 from 38 balls, and Laurence Sematimba added a vital 80 for the eight wicket. Sematimba and Patrick Ochan, 56 from 34 balls, then posted 82 for the ninth wicket as Uganda reached 241 for 8. Nsubuga outstanding all-round day continued, taking 4 for 27 as Argentina were bowled out for 150 in the 47th over.