It won't get many column inches in the mainstream cricket press, but the World Cricket League, which started in Nairobi yesterday and continues into next week, features the best of the rest, the six sides just under the ten Test-playing countries. For the two finalists, the rewards are bountiful - a place among the big boys in the inaugural Twenty20 World Championship in South Africa this September, along with $250,000. For countries used to surviving on annual handouts from the ICC of less than $200,000, that's big money.

With the exception of Bermuda, cricket is not a mainstream sport in any of the participants. And yet it survives, and in some instances thrives, despite the lack of attention and a relatively small number of enthusiasts.

The ICC, who do sterling work in supporting the game's second and third tiers, will rightly use the event to highlight that cricket is not just about the Indians and Australias of the world.

But there remains a nagging worry. The ICC boasts that the game is spreading across the world. But is that right? Is it taking root or is it surviving because more people from its hotbed - south-east Asia - are emigrating and keeping it alive for the duration of their careers?

In last year's Wisden Almanack, Matthew Engel raised this very issue. "Overwhelmingly, the game in non-traditional countries is played by expatriates, mostly South Asian. Journalists were kidded into believing that cricket was about to burst on China, on the basis of some warm comments by civil servants and a couple of coaching courses. I have seen not one shred of evidence to back this up. Are the kids playing with tapeballs on the streets of Shanghai? Are they heck!"

Take Canada. Of the squad in Nairobi at the moment, only three were born in the country, and two of those are over 35. Of the rest, five come from the Caribbean, four from India and each from Pakistan and Uganda. Whereas other Associates have a smattering of expats, Canada are utterly reliant on them.

Engel's comment attracted fierce criticism from those who either argued that England had more than their share of "imports" or that the game only spread in Asia, Africa, Australasia and the Caribbean through expats playing it in the first place. 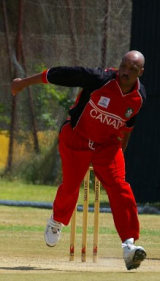 Does it matter? Yes, because as the ICC looks to develop the game in as many places as possible, that means the financial cake has to be cut in ever thinner slices. The ICC needs to concentrate on a smaller number of countries where the chances of the game taking off. It is invidious that Uganda gets the same basic allowance as Belgium.

Cricket is in trouble in its traditional homes in Africa - Zimbabwe are hell-bent on destruction and South Africa seems to be falling out of love with the game. So efforts should be made in Uganda . And in Asia, which everyone accepts is the game's stronghold, a side like Nepal should really be given the leg up. It's about targeting rather than a scattergun approach.

In fairness to the ICC, they have a tough time and a lot of countries scrambling for a share of the spoils. It's about weeding out the weak and really looking to grow the game in areas where it has the best chance of taking root. It's an almost impossible ask. Look at the repeated failure of American Football to crack Europe ... and if football itself still battles for acceptance outside expats and schools in the USA, then the size of the ICC's task becomes clear.

Of course expats have a key role to play in expansion. But if the game is basically played by them, is it the game spreading or is it more about diehards clinging to the traditions of their homelands? In the UK there are baseball and American football sides, but they are almost all expat Americans and so few would seriously claim the games have taken hold. However, basketball and ice hockey are widely played by locals, boosted by some imported players and expats, and, crucially, the national side can stand on its own two feet. That's the difference.