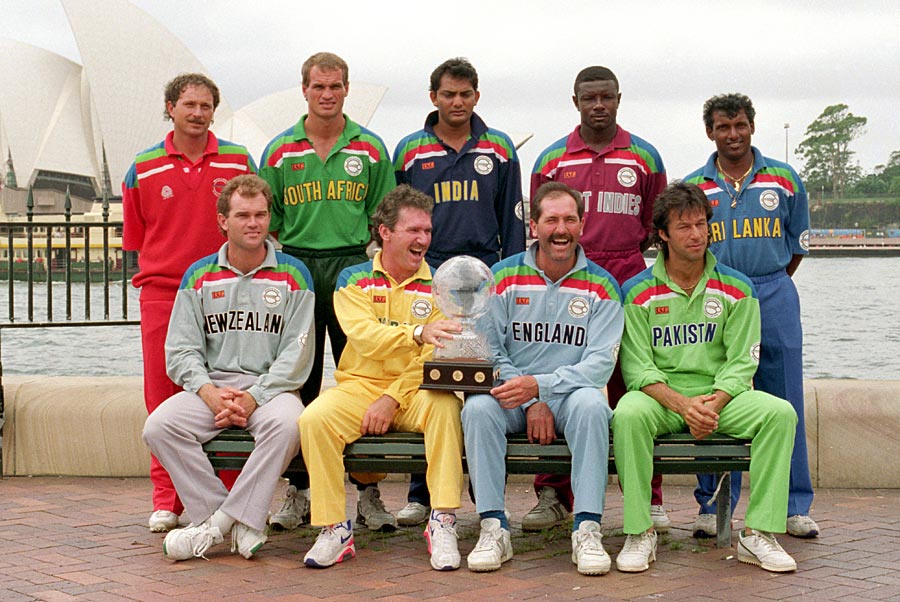 This was the World Cup that thought it was a league. All played all in a qualifying round that went on forever. It was fair but about as exciting as the Nullarbor Plain. The good news was that South Africa joined in for the first time, following the end of apartheid.

Four big ones. The players wore coloured clothing, with names on the back. There were floodlights for most of the 36 games. The white ball - in fact two of them, one at each end (so they didn't get too grubby), which meant they swung prodigiously. The fielding-circle rules were refined, allowing only two men outside the ring in the first 15 overs; after the first 15 it was as before: a minimum of four inside the circle. Result: the birth of the pinch-hitter. Ian Botham did the job for England, and Mark Greatbatch was deployed by New Zealand.

Australia, the holders and hosts, were such hot favourites that the pressure got to them. They lost the opening game, in New Zealand (Martin Crowe 100 not out), and then faced England in Sydney. Botham sniffed the chance to trample Australia into the dirt for one last time and took 4 for 31 and then made 53 not out as England won by eight wickets. Pakistan started dreadfully, losing to West Indies by 10 wickets, and would have gone out if rain had not saved them in Adelaide after England bowled them out for 74. England and New Zealand were the best teams for a long time, but both had peaked too soon. Imran Khan famously told his team: "Listen, just be as if you were a cornered tiger," and they moved into top gear.

What's Afrikaans for "We wuz robbed"? South Africa, playing England, needed 22 off 13 balls when it rained in Sydney. By the time it stopped, they needed 21 off one ball. New Zealand's brave run came to an end as Pakistan successfully chased 263, with the unknown Inzamam-ul-Haq thumping 60 off 37 balls.

Pakistan were on fire at the MCG, and England were not. Derek Pringle (3 for 22) removed the openers, but Imran Khan and Javed Miandad made 72 and 58 as Pakistan recovered to 249 for 6. England were soon 69 for 4 (Botham 0), and when Neil Fairbrother (62) and Allan Lamb (31) launched a recovery, Wasim Akram snuffed it out, bowling Lamb and Chris Lewis with consecutive beauties. Pakistan won by 22 runs.

There was only one of note: the rain rule, drawn up by a panel of experts, including Richie Benaud, for matches affected by bad weather. The idea behind the rule was to avoid the old system - work out the runs-per-over of the first innings and then deduct that for each over lost by the side batting second - which heavily disadvantaged the side batting first. Under the rain rule, the reduction in the target was to be proportionate to the lowest scoring overs of the side batting first, a method that took into account the benefits of chasing, as opposed to setting, a target. The rule raised eyebrows during the washout between England and Pakistan in Adelaide and was utterly discredited when South Africa's chances of qualifying for the final were shattered by 12 minutes of rain, which changed an achievable equation to an impossible one.