An admission: whenever a left-arm wristpinner comes on to bowl I take momentary pause to remind myself of the mechanics of this engagement, literally spelling it out in my head. If the right-arm leggie's stock ball breaks away from the right-hander, then the left-armer's must spin in to him. And the googly will be the one that spins away. Then, all over again when a left-hand batsman is on strike.

It should, you would think, be ingrained after years of watching and covering domestic and international cricket, and years of playing low-grade cricket on fields, narrow streets, car parks and everywhere in between.

Except you know what's more ingrained? A world seen through the vast prison of right-handedness. Most common estimates tell us only one in ten humans are left-handed. The world, unsurprisingly, is thus designed to operate to right-handedness.

Surprisingly, when a left-arm wristspinner comes along, international batsmen appear to react the same way as I do. In almost every one of 11 dismissals against Kuldeep Yadav until the Lord's ODI, it looked as if England's batsmen might have benefited from a brief pause in existence just before he trotted up, to quickly debrief themselves on which way the ball was supposed to turn.

Spin is an old English neurosis, but it isn't just them. One day nearly 12 years ago, Dave Mohammed came on to bowl in a Test against Pakistan in Lahore. If you remember Mohammed now, it's probably because he was, hands down, the greatest celebrator of wickets - the alligator roll, and the take-your-shoe-off-and-pretend-it's-a-phone, to recall but two. And what even are you, Youtube, if you can't be a repository for Mohammed's best celebrations? (The closest we get is this Tabraiz Shamsi tribute.) 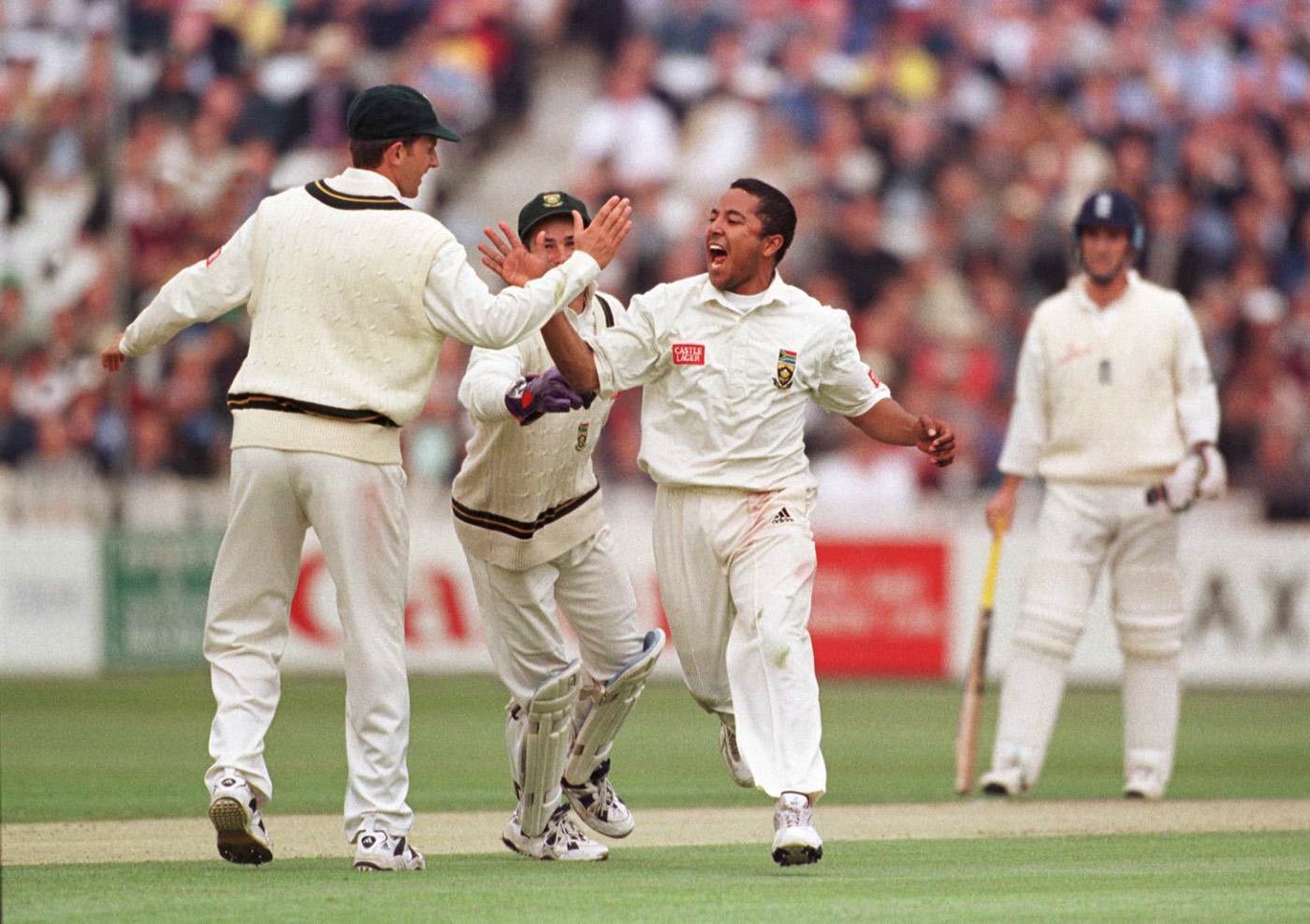 Brad Hogg's ODI record against India is some way off his career record, but he was outstanding in Australia's 4-2 win in this series. Eleven wickets made him the most successful spinner of the series. The jewel was Sachin Tendulkar, clean bowled by a leggie that zipped off the surface quicker than anyone expected.

Australia picked Michael Bevan as a front-line spinner for this Test. He was bowling before drinks on the first morning and not long after, ripping through the tail. But it was in the second innings that he shone, with a six-fer, though none better than the target=new>perfectly pitched legbreak to catch Shivnarine Chanderpaul's edge.

There was enough going on with Paul Adams' action for batsmen to worry about, let alone working out which way it would turn. Then, to have to contend with grubbers like this was too much. And Nasser Hussain knew a thing or two about them.

Hogg at his peak, around the time he was becoming arguably Australia's top ODI spinner. His second wicket in a second ODI five-fer was of Chanderpaul, pulled out of his crease with flight and suckered into a false shot back to the bowler by a dipping, spinning leggie.

Here were the first stirrings of Kuldeep Yadav in international cricket. He had taken three in the previous game but his first here was a ripper. Roston Chase was beaten comprehensively, first by the drift from outside leg and then the break of a googly that he clearly did not pick.

Anyway, in Lahore, Mohammed bowled three balls to Inzamam-ul-Haq. The third was delivered from well behind the crease and did Inzamam mostly in flight but also because it spun in and it wasn't certain that Inzamam knew this. Not long after, Mohammed beat Mohammad Yousuf twice in one over with the googly. Yousuf should've gone off the first, stumped, except the grave misfortune that was umpire Asoka da Silva befell Mohammed.

In his innings, Yousuf was on 51 and setting like cement. In his life he was absolutely the world's best batsman at that moment, in a run of form unmatched over a calendar year. And here was Dave Mohammed, pre-celebration fame, playing him like an instrument. So when Mohammed said that even Brian Lara had no idea what he was bowling when he first encountered him, he probably wasn't boasting.

A few years later in a dead-rubber Test, Salman Butt and Shoaib Malik were resisting Australia like the last small village in a country otherwise occupied, when Simon Katich came on to bowl. The two had batted 45 overs together. They had seen off the left-arm, chest-out aggro of Doug Bollinger, the right-arm unmemorable of Peter Siddle, the low, leftie angle and extreme pace of Mitchell Johnson, Nathan Hauritz's normcore offspin, and Shane Watson (you smirk, but he took a five-fer against them in their next Test). In short, most types of everything had been repelled. Drinks were due, and the second new ball, so Katich came on because everyone was beyond caring. He dismissed Butt, on 102, in his second over, took two more, and Pakistan lost five for 35.

Also think early Paul Adams, Brad Hogg circa the 2007 World Cup, Michael Bevan's Adelaide ten-fer; left-arm wristspinners turn up like glitches in the matrix of cricket, infiltrators from its bizarro world. Everything becomes exactly the way it shouldn't be.

That's clearest in Yadav's dismissal of Johnny Bairstow at Trent Bridge. Get your head round the very unreal angles of that dismissal: leg-before, beaten on the outside edge, by a ball from over the wicket that turned away from him. Everything about it is the wrong way round.

Virat Kohli and MS Dhoni both appealed, and going by his movements, Dhoni picked the wrong'un - no mean feat, given Adam Gilchrist used to find Bevan the most difficult bowler he kept to. But the call for a review was most convincing from the man who created it, who understood what happened.

It helps to mirror this. Imagine Shane Warne trapping Lara leg-before with a googly from over the wicket. The parameters of line, length, angle, flight, drift and degree of turn within which such a dismissal is pulled off are so narrow it's like threading an atom.

Except this hypothetical isn't exactly right, because it only mirrors the physics. The more relevant one, pointed out by Jarrod Kimber, is Wasim Akram's seminal castling of Allan Lamb at the MCG. Coming to that moment in his career, Lamb had not faced many left-arm fast bowlers in international cricket - only Bruce Reid and Akram with regularity, and nobody as unusual as Akram. Lara, on the other hand, would have faced enough legspin in his career (Warne, Stuart McGill, Anil Kumble, Mushtaq Ahmed, Danish Kaneria, Ian Salisbury) to be familiar.

Because we've seen it so many times we overlook not how brilliant the ball was, but how new and rare. A left-arm bowler, round the wicket, angling it in (Moin Khan's first step behind the stumps gives away how much it was angling) and then cutting away: Lamb couldn't have countered it, just like Bairstow couldn't Yadav's googly, because Bairstow wouldn't have come across such a challenge of angles and movement before.

The best illustration of this unfamiliarity, in fact, was the other batsman dismissed in the same over as Bairstow. According to Cricviz, when he was out leg-before to a legbreak Joe Root had only faced three balls of left-arm wristspin in his entire career, and been dismissed twice. Yadav, in the heat of an international T20 and an ODI, is the only meaningful experience Root has of it.

You wouldn't call it a weakness because there just aren't that many left-arm wristspinners around. Ever. If you look at ball-by-ball data, left-arm wristspinners account for only 1.7% of all balls ever bowled by spinners in international cricket. They're so rare there's no acronym, only a politically incorrect categorisation lingering around from the last time the world was politically incorrect. If LAL wasn't so much like LOL it might've caught on.

The most international wickets taken by one is a mere 180. Four international sides (excluding Afghanistan and Ireland) have never even picked one, and Asia, such a prolific breeder of spin, has only just picked its first two, in Lakshan Sandakan and Yadav. And why would you be one in a game in which right-hand batsmen predominate, against whom spinning the ball away is a more potent weapon?

The other thing that does stand out is that if you're going to be a left-arm wristpinner, you're better off being one in limited-overs cricket. Overall, this kind of bowler averages 28.05 with a strike rate of 33.88. In Tests they average 37.84 with a strike rate of 75.14 and Paul Adams is the only one to have taken even 50 Test wickets.

Intuitively this fits in with what we might suspect, that in longer forms where exposure is greater, the shock value wears off. The early exchanges are the most disorienting. Get past that initial unfamiliarity and then picking one becomes, presumably, more routine. In shorter formats, where interaction is more fleeting and generally conducted under greater duress, their rarity has worked for them.

But we're talking of limited sample sizes: only 22 left-arm wristspinners have bowled in that role in international cricket. And at least seven of those - including Bevan and Katich - were not really bowlers. Three others - Yadav, Sandakan and Shamsi, all in action concurrently - are still new. The Test sample size, in particular, is small.

Hogg skews the ODI figures, as an outlier who has had a substantial career. He bowled nearly as many balls as all others combined, played one-third as many matches, and took over 50% of all wickets taken by left-arm wristspinners. Take him out and the overall ODI average for his breed rises nearly two runs. Hogg was the glitch that stayed, because even in shorter formats these days - as Eoin Morgan said of Yadav - the more you play them, the better you work them out. Which is why Hogg's ODI career should be properly recognised for what it was.

What else do we know, with an ascendant Yadav on the cusp of bigger things? Diddlysquat, a mere 174 years after cricket became an international sport.