3 Number of clean sweeps by England in away series of three or more Tests. Each of these victories have come with a gap of more than 50 years. The first away clean sweep of 3-0 was against South Africa in 1895-96 and then against New Zealand in 1962-63. This is only England's second whitewash in series of three or more Tests in last 10 years. The other was their 4-0 win against India at home in 2011.

3 Whitewashes suffered by Sri Lanka in series of three or more matches in the last two years - one each against South Africa (away),and at home to India and England respectively. All other teams combined have just one whitewash in this period - Pakistan's 3-0 defeat in Australia. Incidentally, Sri Lanka had suffered only four whitewashes of three or more games prior to these two years in their entire Test history. 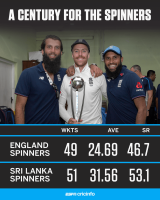 100 Wickets for spinners in the Test series, which are easily the most in any series of fewer than five matches. There have been four series in the past which had featured 100-plus wickets by spinners, and all of them were of five matches. The previous most wickets in any series of three or fewer Tests was 79, in the series involving New Zealand and Sri Lanka in 1998.

Highest % of wickets for spinners in a Test series (min. 3 mats)

90.09 Percentage of wickets taken by spinners in this series, 100 out of 111 that fell to the bowlers. This is the highest in any series of three or more matches. Of the 11 wickets that went to quick bowlers, five fell to Ben Stokes, whose average of 20.40 was the best for any bowler on either team. The previous highest percentage of spin-wickets in any series of three-plus games was 82.35% in the 1986-87 Australia tour of India.

Stats of spinners in the series

52 Wickets for Moeen Ali in matches that have been won by England in the fourth innings, which is now the joint-most among England bowlers with James Anderson. Moeen has taken those wickets in 15 innings and averages 18.19. He already has the fifth-most wickets among spinners in victories in the fourth innings, behind Shane Warne, Rangana Herath, Muttiah Muralitharan and R Ashwin.

4 Centuries by England batsmen in this series, which is their most in any series in Sri Lanka. Incidentally, there was no century from the home team's batsmen. It is only the second three-match home series for Sri Lanka without any of their batsmen scoring a hundred - the other was against Australia in in 1999.