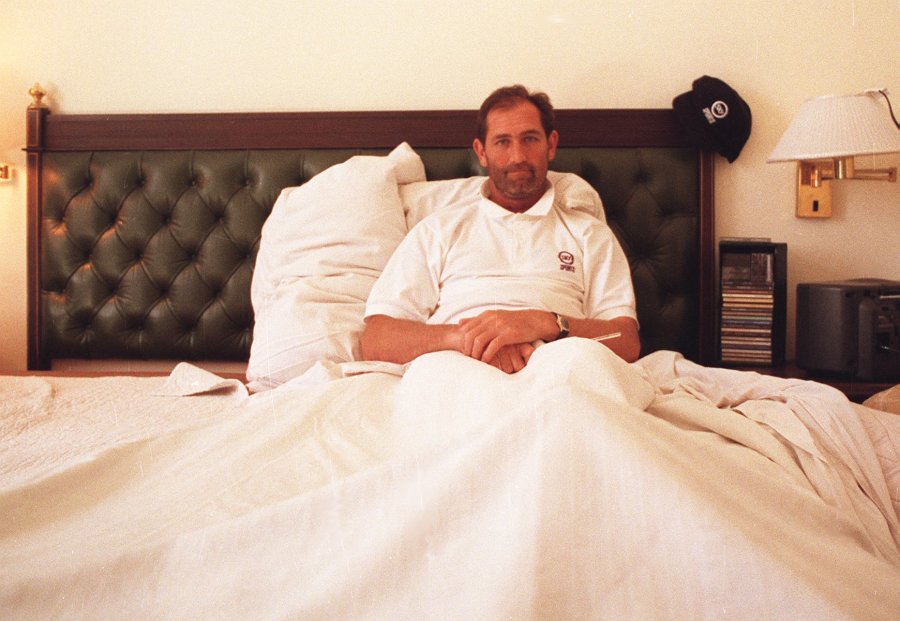 Twenty-five things that are no longer around

Remember what cricket was like two and a half decades ago?

No T20s, no Powerplays, no Duckworth-Lewis, no huddles, no ESPNcricinfo even. Here are some things you may have forgotten from back in the day.

1. Rest days
Yes, dear kids, this is no joke. Back then, players got a whole day off in the middle of Test matches and often went fishing or golfing to recharge themselves. The break usually arrived after day three - almost always a Sunday in England - but it was occasionally moved around, like during a solar eclipse (Bombay, 1980) and a general election (Lord's, 1970). In Georgetown in 1985, on his Test debut, the Guyanese offspinner Clyde Butts made the most of the rest day: he got married.

2. Warm-up games
Teams go into series with one or two (or even zero) warm-up games? Hmpf. Ask Vikram Rathour about the 749 runs he made in the practice matches during the 1996 tour of England. Or Ajay Jadeja about his unbeaten 254 in a warm-up game in South Africa in 1992-93. Maybe your team will lose the Test series, but hey, they would have bossed around ragbag sides with fancy names like Duke of Norfolk XI and NF Oppenheimer XI.

3. Home umpires
For those of you wondering what we argued about before the DRS, there were always home umpires. We scrutinised their every lbw decision and accused them of bias at every opportunity. Visiting teams would remind you that Javed Miandad was seldom given out leg-before at home, and there was Kapil Dev's famous assertion in 1985 that Sri Lanka, who had just beaten India for their first-ever Test series win, would never win a Test away from home. It turned into a curse that would dog them for almost a decade.

4. Pitch invasions
Today's batsmen get to 100, leap up, punch the air with their bats, and kiss their helmets. Gone are the times when their first thought on reaching a landmark was to make sure no spectator was about to embarrass them with a hug or a kiss. Like the first time Sachin Tendulkar opened in ODIs - the fire-starter 82 in Auckland, 1994. He couldn't even celebrate that fifty in peace, as a fan charged in and landed a peck on his cheek.

5. Belly trouble
"Whether or not England have the stomach for a fight in this Test match rather depends on whether they have a stomach left to fight with." Thus began Martin Johnson's report in the Independent when Graham Gooch and several others were struck by a bug after dining at a Chinese restaurant on the eve of the Madras Test of 1993. Stomach upsets still occur during tours of India, but are rarely so dire as when New Zealand, in the Bangalore Test of 1988, needed ex-captain Jeremy Coney to get off commentary and field as a substitute.

6. Some of our favourite stadiums
Carisbrook, Dunedin. Sector 16 Stadium, Chandigarh. The Antigua Recreation Ground, St John's. These stadiums don't host international games anymore, but back then all were a part of the calendar. The ARG, notorious for its epic batathons, was home to, among others, Gravy, the wacky costume-clad dancer, and Chickie, the sprightly DJ who pumped out the music even before play began. In 1986, Chickie immortalised Viv Richards' 56-ball hundred by taking a dig at England's captain David Gower with the song "Captain, the Ship is Sinking".

7. A view from behind the batsman
Cricket watchers today are spoilt for choice with more than 30 cameras at the big games, including UltraMotion cameras, spidercams, stump cams, umpire cams and player cams. But what one almost never sees is live action from behind the batsman. Once upon a time, though, when TV channels had just one fixed camera at many games, this was the view every other over. As when Michael Holding bombarded bouncers at Brian Close at Old Trafford, or the moment when Mohinder Amarnath clinched India the 1983 World Cup.

8. Daddles
To be dismissed without scoring a run when playing Australia in their backyard was bad enough. As if to rub salt into the wound, an animated duck with a bat tucked under a wing, shedding tears and quacking "kill me" waddled across the screen along with the forlorn batsman. Daddles still appears from time to time but the graphic is less a kick in the teeth, more a comical aside.

9. Helmets without grilles
Allan Border, Aravinda de Silva, Arjuna Ranatunga, Brian Lara, Daryll Cullinan: among the last generation of batsmen whose faces you clearly saw, under helmets without grilles. Many of them were adept enough to sway out of the way of sharp bouncers, but not always. In the span of five days in 1995, Robin Smith and Jimmy Adams suffered sickening blows to the face.

10. Umpires in white coats
There was a time when umpires, attired in long white coats, with hands in pockets, looked like professors who had walked straight out of a chemistry lab. And adding to their eccentricity were their trademark gestures - Piloo Reporter, in the words of Richard Hadlee, signing his autograph in the air to signal each four; David Shepherd's hop on 111 or multiples of that number; Dickie Bird's one-legged capering to declare a six.

11. ODIs between Tests
Tests followed by ODIs followed by T20s? How predictable is that. Twenty-five years ago, on their tour to Australia, West Indies played the first Test in Brisbane, followed it up with six ODIs in the Benson & Hedges World Series, then played the second and third Tests, after which they were back to complete the tri-series (which they won), before playing the final two Tests (which too they won). Such schedules were considered normal.

12. Radio buzz
Back in the '80s and early '90s to visit some cricket stadiums - especially in the Caribbean - was to be engulfed by the crackle of transistors from the stands as spectators listened to commentary of the match. The buzz got so annoying at times that the umpires would walk up to the broadcasting booths and ask the radio commentators to call for the fans to turn the volume down. "I heard one such request while listening to commentary of India's tour of the West Indies in 1983," wrote Samir Chopra on his ESPNcricinfo blog, "and instinctively turned down my radio, even though I was thousands of miles away…"

13. Shock and horror at a reverse sweep
Switch on cricket on the television today and you are likely to spot a switch-hit or a reverse-flick or a reverse-ramp or some version of the reverse-sweep that batsmen attempt so matter-of-factly. Twenty-five years ago, the shot might have made you choke on your coffee. Mark Waugh turned into a national joke when he was bowled trying to reverse-sweep Phil Tufnell in an Ashes Test. Mike Gatting is asked to this day about his botched reverse sweep off Allan Border: a shot that perhaps cost England their best chance of winning a World Cup.

14. Awful rain rules
How lucky we are to have the Duckworth-Lewis rule for rain delays. When we were kids, we had to settle for a run-rate comparison at the over when rain interrupted play, and watch in horror as chasing teams gained a big advantage when the target was revised. Then we met Richie Benaud's mightiest goof-up: a rain rule that left South Africa, trying to enter a World Cup final in their first attempt, needing 22 off 13 balls, then 22 off seven, and then a hopeless 22 off one (that's what the electronic scoreboard at the SCG showed, but it should have been 21 off 1). In 12 measly minutes they had gone from favourites to hopeful to puzzled to outraged to angry to shattered.

15. ODIs in whites
Odd as it might appear in the days of pink-ball Tests and pink-jersey ODIs, there was a time - till as recently as the turn of the century - when teams turned up in their whites for one-dayers. England continued to use red Dukes balls and India the red SG, and it helped that boards didn't need to commission new jerseys for a short ODI series. They could stick to Test kits.

16. The Richie Richardson hat
Many cricketers wore hats. Richie Richardson's, however, had a wider, stiffer brim that offered more protection from the sun and didn't flutter much when he gave chase. It also added to his swagger when he got into position and, standing tall, pulled and hooked fast bowlers. Modern batsmen rarely wear any sort of hat when batting, though Mithali Raj remains a prominent exception.

17. Heads peeping through manual scoreboards
Manual scoreboards still exist but only a handful of grounds, like Canberra and Harare, rely on them. Twenty-five years ago, though, it was routine for ground staff to update the manual scoreboard every ball, and to sometimes sit on the scaffolds of the scoreboards, or peek out of the wide gaps to check on the action.

18. Pristine green, pristine whites
No corporate logos on the grass, no logos on player uniforms, no Vodafone, no Reliance, no "icc-cricket.com follow @icc"… yes, it was all so mundane in those days.

19. Country v country veterans' cricket
Our modern veterans enjoy a T20 shindig or two in front of expats craving cricketing action - even in sub-zero temperatures in Switzerland. In the early and mid-'90s, though, the past masters took part in country v country tournaments like the Masters Cup - comprising 45-over games in the Brabourne Stadium in Bombay. West Indian bowlers like Sylvester Clarke and Ezra Moseley got batsmen to duck under bouncers and the South Africans, Barry Richards and Graeme Pollock, showed us glimpses of what cricket had missed during their years of isolation. Gordon Greenidge slammed hundreds without breaking sweat, as if ready for an international comeback.

21. Quadrangulars and pentangulars
Whatever happened to the multi-nation tournaments so central to cricket in the '80s and '90s? Like the Austral-Asia Cup, the Nehru Cup, the Hero Cup, the Independence Cup, and the various cola-sponsored trophies in the subcontinent? None of them seem to have stood a chance in the face of an onslaught from extra-long bilateral ODI series and T20 leagues.

23. Cigarette sponsorships
As cigarettes went out of fashion, cricket stopped seeking endorsement by tobacco brands. But for more than 30 years Benson & Hedges and Wills were part of cricket, and remain synonymous with two World Cups - in 1992 (in Australia and New Zealand) and 1996 (on the Indian subcontinent).

24. Fifty-five-over ODIs
Most of the world had moved on to 50-over ODIs but England's home games were still 55 overs a side till the mid '90s. It might have taken an English batsman 23 years to outdo Robin Smith's 167 against Australia in 1993, but to be fair to all those who tried and failed, Smith had had five extra overs.

25. Warpaint
Back then, a tour to Australia, New Zealand or South Africa meant dealing with bowlers whose cheeks and noses were smeared with white zinc cream. Meant to protect cricketers from harmful UV rays, it also added a layer of menace to the sight of Craig McDermott, Merv Hughes or Allan Donald steaming in. In 1999, researchers in Australia found a way to make the sunblock transparent - and cricket, as per custom, found itself another way to defang bowlers.

Siddhartha Vaidyanathan is a writer based in the USA Wides, lbw calls, swing - plenty of things were different in white-ball cricket back then