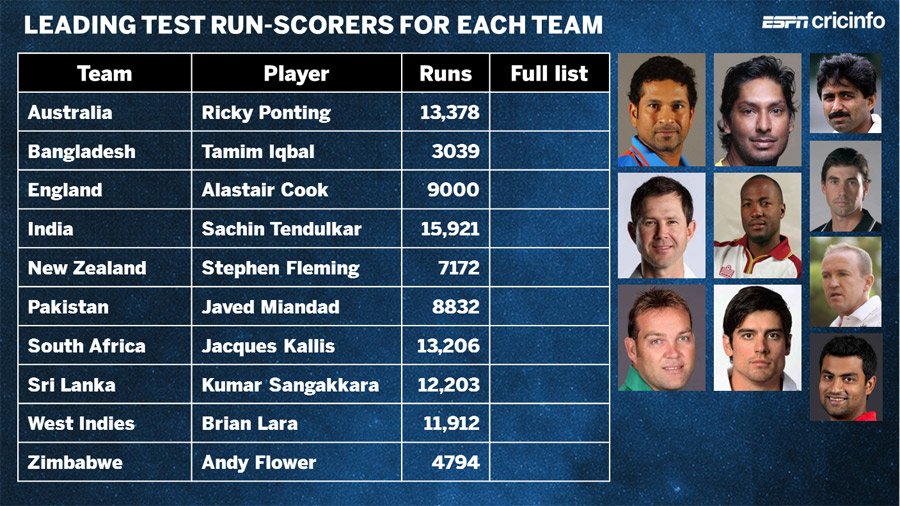 Tamim Iqbal became Bangladesh's highest Test run-scorer when he made seven runs on the fourth morning against India, crossing Habibul Bashar's 3026 runs. The record was broken more than eight years after Bashar ended his Test career in 2008, but Tamim, who is also Bangladesh's highest run-getter in ODIs, said he would have been happier had he reached the milestone earlier.
Aminul Islam was Bangladesh's highest scorer till their first two Tests. Bashar overtook him in the country's third Test in Harare. Aminul made just two in the second innings which took him to 260 but Bashar followed him with 76, which took him to 265 runs in Test cricket. From that point onwards, Bashar held the highest scorer's position for more than 14 years.
In the third over of the fourth morning in Fatullah, Tamim clipped India pace bowler Ishant Sharma towards fine leg for two off the eighth ball he faced to reach the milestone. There was no celebration from Tamim, nor was there any announcement at the ground. Since the giant screen at the stadium also does not work, there remained very few people at the ground who knew about the landmark.
"Actually it took around 7-8 years for me but in this time I have played only 40 Tests and I achieved the stat 10 Tests before [Bashar]," Tamim said. "If I could have reached the mark a few Tests earlier, it definitely would have been good. And those who are close to this record, had they achieved this before it would have been good thing for all of us in terms of quality."
Bashar, who arrived in Fatullah earlier than usual to ensure he was there to witness his own record being broken, said he was happy to see Tamim cross him and wanted the batsman to score 10,000 Test runs.
"I came to the ground early today hoping to see Tamim cross my record," Bashar told ESPNcricinfo. "I told him before the Test match that I wanted to see him do it in this game. I didn't want to wait for too long.
"It is good to see Tamim cross me. It was a long-standing record. I was the highest scorer for a long time actually. But I want Tamim to score at least 10000 runs. I always thought that it would be Shakib or Tamim who would take over my run-scoring record."
Tamim, however, said that at the rate Bangladesh played Tests every year, it would be hard for him to reach that mark. The Fatullah Test against India was his 40th game while Bangladesh is playing their 42nd Test during his Test career. Bangladesh have played the second lowest number of Tests during this time. There are 47 players who have played more Tests than him during his Test career.
"It looks difficult because on an average we play 3-4 Tests a year. So if I play for ten years I will be able to play just around 40 Tests if things go that way. It is difficult to achieve that mark, not just for me but for any top player to score 10000 runs in 60 to 70 Tests But if we play more Tests, at least 7-8 Tests then it is possible. It depends on my form and fitness so maybe it is possible.
"Scoring 10,000 runs is anybody's dream. But we don't play enough matches. Even if I average at 50 at this current frequency of matches, it won't be enough."
Tamim predicted that someone like Mominul Haque is most likely to surpass his haul in the near future, at a faster rate. "I never think that the record will stay for a long time. If you see Mominul's average… he should overtake this score 5-6 matches before me. And the way he is playing I think he and other young players can do this. Maybe I have overcome Shumon [Bashar] bhai's record 10 matches before him, others may do it 5-6-7 matches before me," he said.
Bashar played 50 Tests during his eight-year Test career, scoring at an average of 30.87 with three hundreds and 24 fifties. Tamim has a better conversion rate, with seven centuries and 17 fifties from 40 Tests. Bashar felt he had missed out on plenty of runs in his career due to the poor facilities around the senior team during his time.
"I could have scored six to seven thousand runs had I been a player these days. Facilities now are so much better from the start. I also missed out on a number of hundreds," Bashar said. "I wish I converted those 24 fifties into more centuries. In my day there was not much competition too for places in the team. Only [Mohammad] Ashraful was around."
When Bashar's career ended in early 2008, Tamim had played only three Tests and Bangladesh's Test batting line-up looked unsafe without their only consistent scorer at the time. Tamim has been part of the change, and that has pleased Bashar, who is currently a selector.
"[Habibul Bashar] Shumon bhai had come to the dressing room to congratulate me and that was very nice of him," Tamim said.
Tamim IqbalHabibul BasharBangladeshBangladesh vs IndiaIndia tour of Bangladesh