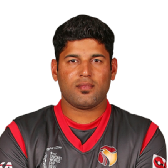 6.13pm Another crazy encounter, another finish that went down to the wire. Zimbabwe are out - well, they could still qualify if tomorrow's game is a low-scoring tie, but the chances of that are way too low. Effectively tomorrow's game is a knockout for a spot in the 2019 World Cup. The winner goes through, the loser goes home. Zimbabwe will hope for a miraculous tie. Hope you enjoyed ESPNcricinfo's coverage of another nail-biter from the World Cup Qualifiers in Zimbabwe. Thanks for your company. Bye bye!

6.02 First up the winning captain Rohan Mustafa: "It's a big win for us, beating a Test team. No one knew about us, know they'll know about us. Feel sorry for Zimbabwe, but that's sport. Injuries hurt us in the Super sixes, but we have shown how much we've changed in the past 1.5 years. We'll come hard next time."

MSH: "Only hope for ZIM is for tomorrow's match to be a tie. "

Graeme Cremer: "(what went wrong?) We lost wickets in crucial periods. Taking nothing away from UAE, they bowled and fielded excellently. Credit to our team for holding our nerve in a few games through the tournament. We'll pick ourselves up soon, but right now it doesn't feel too good."

5.59pm Tomorrow's last super-six game, between Ireland and Afghanistan, will decide which of these two teams will qualify into the 2019 World Cup. Zimbabwe's dream is still alive, but barely.

Their NRR (0.42) has dropped below Ireland's (0.47), so even if tomorrow's game is washed out, Ireland will qualify. But in the case of a tie in tomorrow's game, Ireland's NRR will drop and Zimbabwe would go through. It's unlikely, but possible. Word from the two captains in a moment.

Keyur: "How costly has that drop from raza proved to be"

Mohammad Naveed is the Man of the Match He says: "I bowled wicket to wicket and the yorker came off. Dedicate this to my brother."

5.54pm UAE have almost knocked Zimbabwe out of World Cup contention. They did well, trying to chase a rather inflated score of 230 in 40 overs, but it wasn't to be tonight. We could see a Zimbabwe-less World Cup for the first time since 1979!

39.6
2
Mohammad Naveed to Ervine, 2 runs, full toss outside off, sliced over point and they only take a couple. UAE win! Zimbabwe lose by three runs, but they're not out yet. If tomorrow's game is tied, then they'd go through. But it doesn't look good for Zimbabwe right now: they're on the brink of elimination

It's simple for Zimbabwe now. They need a six off the final ball to qualify for the 2019 World Cup

39.5
1
Mohammad Naveed to Jarvis, 1 run, full outside off, and slapped down the ground to long off

39.4
1
Mohammad Naveed to Ervine, 1 run, low ful toss on middle stump, smacked to cover for a single but all they can do is take a single

39.3
4
Mohammad Naveed to Ervine, FOUR runs, through to the third-man boundary! It ain't over just yet. Naveed delivers a ful toss on off stump, and Ervine's big heave takes the outside edge. Zimbabwe will take that

Nervous signs in the Zimbabwe camp. Streak and Klusener can't watch this