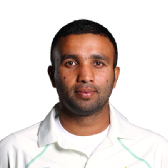 A century from opener Sami Aslam, followed by an incisive spell of 4 for 25 from left-arm spinner Zafar Gohar, helped Pakistan Under-19s lift the tri-nation tourmanent trophy with a comprehensive 192-run win over England Under-19s in the final at Trent Bridge.

Aslam, the Man of the Match, struck 10 fours during his 121-ball 110, and put up a mammoth 163 runs for the third wicket with Shayan Jahangir, who scored 85 off 70 balls. The pair were dismissed in consecutive overs towards the end of the innings, but Kamran Ghulam smashed eight fours and two sixes during his unbeaten 32-ball 61 to take the visitors to 343 for 6 in 50 overs. The English bowlers were all expensive, Will Rhodes, the best of them, picking up 2 for 64.

England, chasing nearly seven-an-over, stumbled to 31 for 2 after the first 10 as openers Jonathan Tattersall and Harry Finch fell to left-arm seamer Mohammad Aftab. Ryan Higgins, with an unbeaten 70 was the only batsman to offer resistance as Pakistan kept up the pressure.

A 42-run stand between Higgins and Will Rhodes sought to restore the chase but Gohar snuck through the latter's defences to wrest the advantage back. He also accounted for Lewis McManus and Miles Hammond in the 26th over as England slipped to 116 for 6. Hussain Talat, with 3 for 18, was an able deputy, polishing off the lower order as he and Gohar set up a comfortable win that gave Pakistan the trophy.