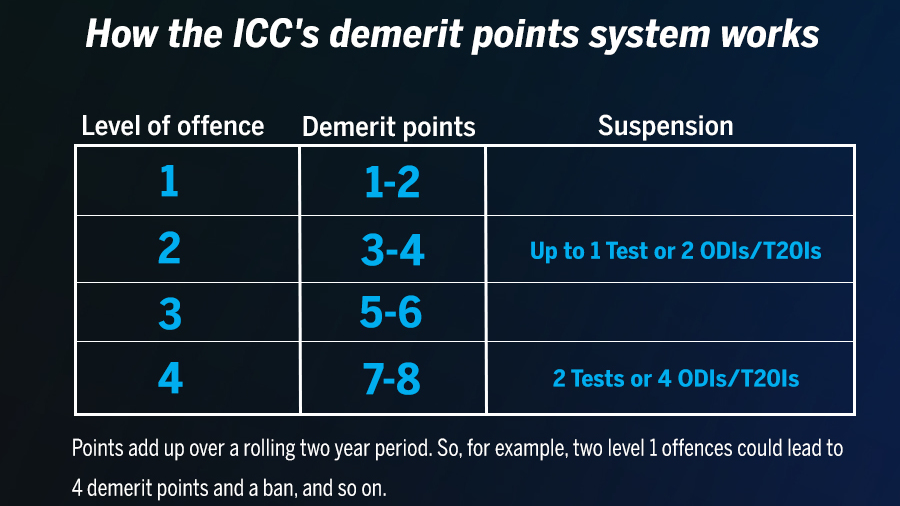 Why has Ravindra Jadeja been banned for India's third Test in Sri Lanka?
Jadeja has accumulated six demerit points in the past 10 months as per the ICC's Code of Conduct regulations. Four demerit points within 24 months leads to a one Test or two limited-over games suspension.

During the second Test, Jadeja, after bowling to Malinda Pushpakumara, threw the ball at the batsman. It was deemed "dangerous" by the umpires, and he was given three demerit points. Jadeja already had three demerit points for running on the pitch during the home Test series against England last October.

So how does this demerit point system work?

Who decides what level of offence has been committed and how many demerit points a player should receive?
In most cases, it is the on-field umpires who report offences to the match referee. He then decides on the number of demerit points and informs the player or team of his decision. The player and team can then contest it, which would lead to a hearing.

So now that Jadeja has been banned, will his demerit points be reset to zero?

But isn't that punishing a player twice for the same offence?

It seems that way, but the point of the demerit point system is to increase the level of punishment the more frequently a player breaches the Code of Conduct. Also, having the demerit points still stand after a suspension will prevent players from deliberately committing offences in order to time their bans so they miss less important matches.

If Jadeja knew another demerit point would get him suspended for a Test but then clear his record, he could have deliberately got one so he missed the dead rubber against Sri Lanka and went into the next series with a clean slate. But this way, his six demerit points stay with him despite the suspension.

How long has this system been around for? And how is it different from the previous one?

The demerit points system was introduced by the ICC in September 2016. The Code of Conduct has been in place for a long time, but earlier Level 1 and Level 2 offences resulted only in fines. Now, an accumulation of minor offences could lead to suspensions.

How many cricketers have accumulated these points so far?
A total of 45 male and seven female players across Full Members and Associates have been handed demerit points in the 11-month period since the new rules came in. Only two of them - Niroshan Dickwella (7) and Ravindra Jadeja (6) - have six or more points.

Will the introduction of yellow and red cards affect the demerit point system?
From October 1 onwards, umpires will be empowered to penalise players and teams during games, instead of just sanctioning and punishing them at the end of it. They will be able to give teams run penalties and even, in extreme scenarios, remove players from the field.

These new rules are thought to be mainly aimed at protecting umpires in lower-level cricket. The demerit points system will remain the same as it is aimed at taking action against players after games.