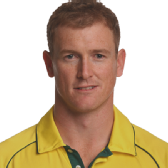 There was talk that England had chartered a plane to fly them out of Sydney immediately after this match. Who could blame them? Beaten, bullied and broken by the Australians in the Tests and ODIs, England finished their tour with another heavy loss, this time by 84 runs, in the final T20. It meant another clean sweep for Australia. It meant across all formats, Australia had crushed England 12-1 this summer. The 1 was an ODI in which Australia rested several key players.

That England were bowled out for 111 - English cricket's unlucky number - seemed somehow appropriate. Anything that could go wrong for England on this trip has, although that has as much been due to Australia's outstanding cricket as English misfortune. In this final game, the difference between the sides was evident from the way Australia finished their innings, when the captain George Bailey plundered 26 runs off the last over from Jade Dernbach.

It pushed the target into seriously difficult territory, although with the exception of Eoin Morgan, England's batsmen looked incapable of chasing down 150, let alone 196. Michael Lumb had been dropped, which meant a new opening combination of Luke Wright and Alex Hales but neither man reached double figures. Wright pulled a catch to deep square leg off Mitchell Starc for 8 and Hales was also caught in the deep off Nathan Coulter-Nile for 6.

England's 2 for 19 became 3 for 25 when Ben Stokes, in for his first match of the series, was caught for 5 off a leading edge from the offspin of Glenn Maxwell. Joe Root did not have the time he required to get himself in, and consequently ate up 21 balls scratching along to 11 before he holed out to deep midwicket to give Maxwell his second wicket and Cutting his second catch.

By then, the required run rate had inflated so much that the result was inevitable. Morgan struck a couple of sixes but was caught in the deep for 34 off 20, and the final overs were notable not for anything England did but for the young legspinner James Muirhead continuing to impress the Australian selectors, picking up two wickets by drawing Tim Bresnan out of his crease for a stumping and bowling Stuart Broad with a big legbreak.

All England could do was avoid their biggest ever T20 loss. The 90-run defeat against India in Colombo in 2012 remains their worst, but this occupies equal second on their all-time list. It was Bailey who really sunk them with his unbeaten 49 off 20 deliveries towards the end of Australia's innings.

Dernbach finished with 0 for 49 from his four overs when his last was wrecked by Bailey. All six balls seemed in the slot for Bailey, who struck three fours and two sixes, including a long and high one over long-on, before the last ball produced a slash to third man for two, and England couldn't even finish with a run-out as Jos Buttler missed trying to flick the bails off.

Bailey had good support from Matthew Wade, who finished on 19 from 10 balls, in a 56-run partnership that came after Broad threatened to peg the Australians back with two wickets in the 16th over. Broad, who finished with 3 for 30, had the veteran Brad Hodge caught at deep fine leg hooking for 7 and two balls later bowled Daniel Christian for a duck to leave Australia at 6 for 139 with four overs to go.

Again Australia's opening partnership of Cameron White and Aaron Finch set a strong platform with a 48-run stand - they started the series with a 106-run partnership in Hobart and followed it with 48 in Melbourne - and Finch was the more threatening of the two, crunching Stokes for a pair of sixes in his first over. But, on 30 from 21 balls, Finch mistimed a pull and lobbed a catch up to midwicket off Bresnan.

Maxwell cleared the boundary twice, including a searing flat six over long-off, before he was caught at long-on from the bowling of Broad for 14. Australia promoted Cutting as a pinch hitter and the ploy worked reasonably well as Cutting showed his power with three sixes in his 29 off 16 balls before he was sharply caught by Root off his own bowling.

White struggled for fluency but steered the innings nicely with 41 off 37 balls before he was given out caught down leg side off the debutant Chris Jordan, a decision that White seemed unhappy with but which brought Hodge to the crease for his long-awaited first international innings in nearly six years. Hodge managed a one, a two and an inside-edged four before picking out fine leg with his hook.

Miked up by Channel Nine in the field later, Hodge said he was just happy to be part of what had been such a remarkable summer for the Australians. England's players are just as happy that it is now all over.