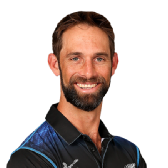 New Zealand survived a late scare to book their place in another global semi-final with a four-wicket victory after exploiting a lively Wanderers pitch to skittle England for 146. Brendon McCullum and Martin Guptill took out more than half the target in little more than 12 overs, but England's quicks claimed 5 for 27 to ensure New Zealand had to work hard to cross the line. Ultimately, though, the success of New Zealand's bowlers was the deciding factor with Grant Elliott claiming a career-best 4 for 31 alongside Shane Bond's return to form with 3 for 21.

New Zealand knew they were better going hard at the target than waiting for the unplayable balls to come along and the value of that approach came to the fore later. Guptill, following from his 66 against Sri Lanka, collected the early boundaries, but McCullum was soon catching up as he launched sixes off England's three frontline pacemen. The opening partnership barely missed the injured Jesse Ryder as the pair gathered nine fours and three sixes until McCullum carved a catch to cover. Guptill completed a run-a-ball half century, but when he edged James Anderson to slip it sparked some nerves.

Ross Taylor was brilliantly held at second slip as Graeme Swann dived full stretch to his right. Stuart Broad then bounced out Elliott and Gareth Hopkins, while Ryan Sidebottom returned to have Neil Broom caught behind, a third catch to stand-in keep Eoin Morgan. It put in context the effort of the openers - the only time all match that bat dominated - and that England's bowlers took too long to find their lines. In the end, Daniel Vettori sealed the chase with a thumping pull through midwicket and with so many overs to spare New Zealand finish top of the group, which means a semi-final back at the Wanderers.

However, the talking point of the match came when Vettori reversed an appeal against Paul Collingwood, the second such incident in the tournament. Collingwood reared his head out of the line of a short ball from Kyle Mills and immediately walked out of the crease thinking the over was complete. McCullum threw down the stumps and the appeal was referred to the third umpire who gave it out. By then, New Zealand were in a huddle discussing their options and eventually Vettori and Collingwood shook hands.

If Collingwood had gone onto make a big score - and it didn't look out of the question as he peppered the leg-side boundary - Vettori would have had second thoughts about his decision, especially with New Zealand's tournament hopes hanging on this result but, like with Andrew Strauss when he recalled Angelo Mathews against Sri Lanka, Vettori ended with his reputation enhanced and a vital victory.

For once, Strauss hadn't been lucky with the toss and the day went downhill rapidly for England on a surface that produced some spiteful deliveries. The captain received one that climbed off a length second ball, taking a thin edge through to McCullum, and Bond was soon in on the action when he ripped one through the defences of Joe Denly, uprooting the off stump. The ball didn't bounce as Denly expected and the batsman was caught on the back foot.

Uneven bounce was a regular feature of the innings, but Owais Shah's dismissal had nothing to do with the pitch. Coming off his breathtaking 89-ball 98 against South Africa, Shah clearly felt in supreme touch but he tried to dominate too early when he heaved across the line. Bond has had a slow start to the tournament, but came good when New Zealand needed him most with plenty of deliveries proving unplayable off a lively surface.

At 13 for 3, it was purely a case of survival for Collingwood and Morgan. Collingwood broke the shackles with a thumping pull over deep square-leg and also punched Mills down the ground before his run-out reprieve. But just as the fourth-wicket pair had begun to set a platform, Ian Butler provided the breakthrough when a top-edged cut from Morgan was parried by McCullum and taken on the rebound by an alert Taylor from first slip.

If England hoped life would get easier with the change bowlers in operation they were given a rude surprise as Elliott proved nearly as difficult as Bond. To begin with, Elliott sprayed the ball too wide, but was soon among the wickets. His first owed a little to luck and a lot to superb catch at midwicket by Taylor, as another short ball that should have gone for four was plucked out of the air.

Elliott then found the edge of Luke Wright's bat with one that shaped away and clung onto a sharp, low caught-and-bowled to remove Broad. Swann gave Elliott his career-best fourth scalp with a top-edged pull that looped to McCullum. Ravi Bopara, playing due to Matt Prior's ongoing health issues, gathered what he could without ever looking settled against the moving ball and was eventually undone by a shooter from Bond that would have taken leg stump.

There was enough life in the pitch for England to cause New Zealand a host of problems if they bowled well, but it soon became clear who were the side that were desperate to win. New Zealand have been in knockout phases since their second match, when defeat would have sent them home, and have come through each challenge, while England will hope this defeat hasn't burst their unexpected bubble of success.