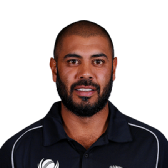 Jeetan Patel was hailed as "one of the best overseas players Warwickshire have ever had" by Ian Bell after his career-best one-day bowling performance guided his side to the final of the Royal London Cup.

Patel, with the first five-wicket haul of a limited-overs career that stretches back to the previous century, expertly applied pressure on a Somerset batting order chasing a testing target on a slow, used surface. With some balls turning and some skidding on, Patel claimed all his dismissals with leg before shouts, punishing Somerset's habit of playing across the line. Warwickshire will play Surrey in the final at Lord's on September 17.

When Patel signed for Warwickshire in 2009, he looked a modest addition. He was not the sort of star name that increased the gate and did not have the sort of record - he had a first-class bowling average above 40 - that suggested he would prove a match-winner.

But a star he has been. He has taken at least 50 wickets in each of the last five first-class county seasons - he is the leading wicket-taker in Division One of the County Championship this year - improved his batting to the point where he averages 26.69 for Warwickshire in first-class cricket (with two centuries and 11 half-centuries) and proved himself indispensable. He deserves to be rated, alongside Allan Donald, Brian Lara, Rohan Kanhai and the rest, as the best Warwickshire have had.

He has already agreed to return in 2017 and, if the club ask, will sign for 2018 as well. He insists he has not thought about qualifying for England ("wouldn't I just be holding back a young fella?" was his typically no nonsense response to that question) but admitted it was an intriguing idea. Nobody in England bowls spin anywhere near this standard.

Or New Zealand for that matter. But Patel turned down the last approach for a recall a couple of years ago reasoning that leaving in the middle of a county season may compromise his relatively secure day job with Warwickshire for two weeks of modestly-paid international cricket. He is, though, a far better bowler - and batsman, actually - than the man who last played international cricket in January 2013.

He did not play a lone hand here, though. Oliver Hannon-Dalby, bowling with control and skill, produced his best Warwickshire performance of the season and gained movement off the seam that was largely absent to other seamers, while Warwickshire's top three all batted with maturity and skill. Both teams felt their final total - 284 - was about 20 above par on this surface.

The Warwickshire method is not fashionable. Whereas conventional wisdom insists that modern batsmen must blast the ball into the stands, Warwickshire have several accumulators who are more adept at finding gaps, rotating the strike and playing the percentages.

Perhaps, on the perfect batting tracks that currently prevail in ODIs, such a tactic might be passé, but on county surfaces (this pitch had been used on T20 Finals Day) it is highly effective. You pretty much know what you're going to get from them: they scored 283 in both their previous List A games and 284 here.

Sam Hain, now the leading run-scorer in the competition this season, set the tone in an opening stand of 90 with Jonathan Trott. While Trott, who looks in sublime form, was deceived by a fine slower ball from Roelof van der Merwe, Bell judged the conditions expertly and produced his highest score in any format since the second week of April in ensuring they set a testing target. "You're going to see a lot of Hain in the future," Bell said afterwards.

Warwickshire only managed one boundary from the end of the 33rd over to mid-way through the 45th (and only hit three fours in their last 10 overs) and, from a base of 149 for 1` after 30 overs, may have felt they finished 20 or so short of the total they wanted.

But Bell provided some late acceleration. He took 16 off van der Merwe's final three balls, rather denting his figures in the process, with one of the two sixes driven into the third tier of Warwickshire's new pavilion. It is hard to recall a bigger hit since the redevelopment.

With Tim Ambrose injured while batting - he appears to pull a hamstring, though Warwickshire say they are confident that he will be fit for their Championship match against Middlesex in mid-week - Somerset sportingly allowed Warwickshire to bring in Alex Mellor as a specialist substitute with the gloves.

Mellor, who has been on loan with Derbyshire and had never before kept for Warwickshire in first team cricket, was just settling down for an afternoon in the sun of his Staffordshire garden when the phone went demanding his presence at Edgbaston, but he made good time and took the gloves a few overs into the Somerset reply.

He took a key catch, too. Tom Abell, had batted beautifully in adding 75 with Peter Trego and appeared to have put Somerset on track. But with Hannon-Dalby's tight first spell increasing the pressure, Abell attempted to hit one from Chris Wright through mid-on and somehow edged a high catch to young Mellor.

When Trego missed an attempted pull off Patel, it precipitated a decline that saw four wickets fall - all to Patel and all leg before - for the addition of just 16 runs. Warwickshire supporters started booking their trains and hotels.

But Ryan Davies, hitting the ball with a crispness that belied a previous List A best of just 14, had other ideas. He added 71 in 10 overs with James Hildreth, who survived a missed stumping off Josh Poysden when he had 17 and, even after the latter drove to mid-off and Davies became Patel's final victim, Tom Groenewald and Max Waller continued the charge.

But Hannon-Dalby wasn't going to allow 16 required off the final over and it was Warwickshire who progressed to Lord's.

It is to be hoped it raises spirits around Edgbaston. There have been faces as long as Livery Street - as they say locally - round here of late with a disappointing T20 campaign followed by a decline in the Championship. This cup run does not make everything better - there were only three locally developed players in this Warwickshire side (Somerset fielded six) that remains uncomfortably reliant upon cricketers in their mid-30s - but it will perhaps prove enough of a boost to end talk of a clear-out.

"We showed some character," Matt Maynard, the Somerset coach said afterwards. "We looked dead and buried a few times there. But we let the rate get up when we batted and we let them score 20 too many when we bowled. It was only the second game we have lost all competition, but it's in a semi-final."

"Our fielding standards can improve," Bell said. "But I'm very proud of the way we've played. Jeetan goes under the radar a bit, but he is one of the best overseas players Warwickshire have ever had. We're lucky to have him."