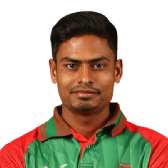 That's all we have for you, thank you for your company and your comments. Good bye.

"Definitely, It's all been with us. We're very happy," Mashrafe Mortaza says. "First of all, Shakib, Tamim and Anamul, Mushfiq was the crisis man, Taijul was brilliant today and Arafat Sunny as well. They [backroom staff] kept working hard with us, giving us a lot of support and they have done a really good job."

Taijul Islam is the Man of the Match, for his hat-trick and finishing with 4-11 and collects a trophy from the Bangladesh prime minister.

Mushfiqur Rahim is the Man of the Series and he finally collects the trophy for winning the Tests 3-0. "Hard work for us this year, boys showed character and the batsmen did well. Shakib, Mominul and Mahmudullah batted really well and our bowlers did really well as well. Taijul and the spinners gave us the 20 wickets we needed. Couple of areas where we have really improved. and in the ODIs, Mash did a great job. Just happy to contribute to the team [even if I am not captain]"

"I dont think it was a good total, below par. Bowlers fought hard, it was a bit disappointing if you looked at the whole game," Elton Chigumbura says, "We've performend in patches and so we need to look at that, especially with the World Cup coming up. One or two guys are putting their hands up, but we need to correct our mistakes before going to the World Cup. Bowlers bowled well throughout the series and the Tests, they just need to carry on. Main thing is the batting and we need to improve quickly"

Wafi Aziz Satta: "Given Mahmudullah's heroics in this series, coming in every time and digging his team out of trouble, I reckon he should deservedly be the Man of the Series. What a great Birthday gift this has been for me today. Woohoo!"

5.30 pm It wasn't as clear cut as the scorecard might make it seem, but Mahmudullah was the difference again. He just about managed to keep the good balls out, punished the bad ones and secured a famous win. Zimbabwe had kept themselves in the hunt despite posting only 128 with Tendai Chatara and Tinashe Panyangara's probing spells. But the day will be remembered for Taijul Islam, who became the first bowler in ODI history to claim a hat-trick on debut

"We needed it, we deserved it with the consistent cricket we have played," says Mahmudullah, "It's been a boost before the World Cup. We need to work really hard, conditions will be different there"

Riju: "seems like Shakib is going to bag another Man of the Series award. But for me it should go to Mash for his (top order) wickets, one match winning cameo and unorthodox captaincy :)"

Solomon Mire into the attack, with Bangladesh needing eight more

Hassan Arif: "I was hoping Bangladesh would win by 10 wickets. But Bangladesh is winning like bangladesh"

23.3
0
Kamungozi to Mahmudullah, no run, fuller delivery on off stump, defended